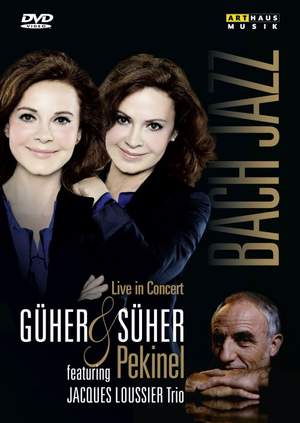 Güher and Süher Pekinel are recognized worldwide as a Duo of most exceptional artistry and magnetism. Their performances in recital and with leading orchestras are considered to demonstrate extraordinary musicality, keyboard command and unanimity of style and execution. Worldwide they are the only Duo playing without any eye contact in order to concentrate on their respective “breath of musical momentum”. Born as twins in Istanbul, the Pekinels fi rst appeared in public at the age of six and three years later made their orchestral debut with the Ankara Philharmonic, broadcast live throughout Turkey. Beginning their studies at Conservatoire de Paris, the Pekinels later studied with piano legends like Rudolf Serkin, Claudio Arrau and Mieczyslaw Horszowski at the Curtis Institute and Juillard School in New York. They were introduced to the Salzburg Festival audience by Herbert von Karajan at his invitation in 1984, and who worked with them on a number of subsequent occasions.

Including the documentary DOUBLE LIFE: Portrait about the musical lives of Güher and Süher Pekinel.

“... The Pekinels are widely regarded as the fi nest duo-pianist team since Arthur and Karl-Ulrich Schnabel.” The Pianist Magazine