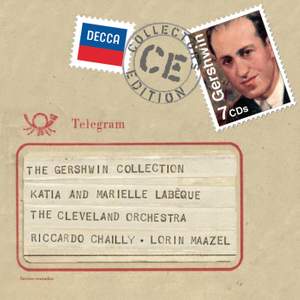 Gershwin: But Not for Me (from "Girl Crazy")

Gershwin: Has Anyone Seen Joe (from "Blue Monday")

I loves you, Porgy

Gershwin: Shall We Dance

Let's Call The Whole Thing Off

Gershwin: An American In London

Gershwin: For You, For Me, For Evermore

"A Woman Is a Sometime Thing"

"They Pass By Singin'...Here Comes Big Boy!...Don't You Ever Let a Woman Grieve You"

"Overflow, Overflow ... Gawd Got Plenty Of Money For De Saucer"

"Um! A Saucer-Burial Setup, I See"

"Headin' For the Promis' Lan'"

"It Takes a Long Pull To Get There"

"Bess, You Is My Woman Now"

"It Ain't Necessarily So"

"Honey, Dat's All De Breakfast...Take You' Hands Off Me"

"Porgy, Porgy, Dat You There"

"I Loves You, Porgy"

"Why You Been Out On That Wharf?"

"Oh, Doctor Jesus, Look Down On Me Wit' Pity"

"Oh Dere's Somebody Knockin' At De Do'"

Many of the orchestras and artists in this set are internationallyacclaimed names whne it comes to the music of Gershwin - from Katia and Marielle Labèque and Barbara Hendricks, to Arthur Fielder and the Boston Pops; Lorin Maazel's complete recording of Porgy and Bess from Cleveland has been a classic of the gramophone since it was released in 1976.

"This superb recording with Cleveland forces conducted by Maazel establishes the work's formidable status beyond question ... the recording is one of the most vivid that even Decca has produced" The Penguin Guide