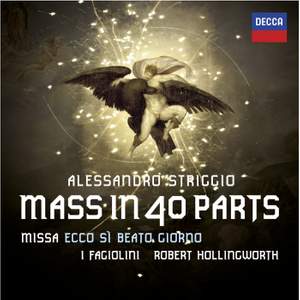 The instruments transfigure much of this music. They do the heavy lifting for some of the choir parts in the Mass and Ecce beatum lucem, contribute to the spacious sonorities, and add delicate... — BBC Music Magazine, April 2011, 4 out of 5 stars More…

Recording of the Week,  Striggio: Mass in 40 Parts

Robert Hollingworth and I Fagiolini give the world premiere recording of the Italian Renaissance composer’s mighty Missa Ecco si Beato Giorno, rediscovered and identified in Paris five years ago, and composed shortly before Tallis’s Spem in alium.

Celebrating the Rediscovery of a Long-lost Mass in 40 Parts.

A feast of Renaissance choral music from Italy and England, the album reveals a work by the Italian, Alessandro Striggio – believed lost until the recent discovery of vocal parts, in Paris.

Striggio travelled extensively to the courts of Europe and it was probably a performance during his visit to Elizabethan England in 1567 that inspired Tallis to write Spem in alium, which is performed here with rarely heard instrumental accompaniment and the benefit of a major piece of textual change reinforcing the message of forgiveness.

I Fagiolini is an acclaimed British solo-voice ensemble specialising in Renaissance and Contemporary music. An inspired programmer, Robert Hollingworth founded the group in 1986.

“There is nothing ordinary about a performance by I Fagiolini. These singers have made their reputation by turning their backs on convention” (The Guardian).

The instruments transfigure much of this music. They do the heavy lifting for some of the choir parts in the Mass and Ecce beatum lucem, contribute to the spacious sonorities, and add delicate moments of colour...Without instruments, the I Fagiolini voices can be tender and nuanced.

The ear is constantly taken by details in the elephantine crowd, a distant tenor laughing up a scale, an abrasive shawm doubling a choir's 'hosanna'...Tallis's Spem in Alium is performed with instruments, a legitimate and rare event.

I Fagiliolini seem to revel in the showy splendour of it all...Hollingworth has chosen his combination of voices and instruments with care...Worth hearing? Definitely.

So, what's all the fuss about? It all comes down to the three 'S's -size, sonority and seductive spirituality (maybe that's four)...one of the most ambitious and worthwhile Early Music projects for years. That it's a hit too can only be a good thing for all concerned. An important and outstanding release.

Musically the Striggio is much simpler than the Tallis...But there are other things to enjoy with Striggio’s Italian style, which is often much more intricate and ornate...The disc is superbly recorded, capturing the huge scale of the music, whilst retaining plenty of detail.

[I Fagiolini] do not perform Spem in Alium exactly as we are used to hearing it, for conductor Robert Hollingworth adds continuo to the voices there too, giving extra definition to the work's passing dissonances, which take it far beyond the sumptuous but bland harmonic world of Striggio's models.

Though Striggio's more formal Italian harmonic decorum precludes the kind of harmonic complexities that make Tallis's masterwork such a superb experience, it nonetheless inhabits a powerfully affecting landscape, and is arranged here for period orchestration featuring viols, cornetts, lutes and the like.

Beautifully performed by I Fagiolini with soloists and countless continuo parts, the polychoral effects are striking but harmonically not very interesting. Striggio's secular madrigals are more alluring, and at the end comes Tallis's more famous 40-part Spem in alium, done here with instruments, incomparably more subtle and moving, a masterpiece.

[The Striggio's] impact in this premiere recording by the voices and period instruments of I Fagiolini under Robert Hollingworth is terrific...Far from splurging his ample resources at once, Striggio juxtaposes passages of differing density, guided by the implications of the Mass text, to create a dramatic expanse in which the full effect of the 40 (or 60) voices is all the more powerful for having been kept in reserve.

Decca’s engineers... did an excellent job balancing individual details against the total sound picture. Striggio’s music isn’t as richly textured as Tallis’s: no dissonant crunches, fewer soaring blasts. Yet you can still get hypnotised by the dappled flow of mellifluous chords, decorated with florid phrases winding round like honeysuckle.