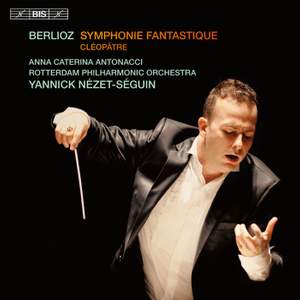 one hears that what Nézet-Séguin offers (aided by a superlatively airy, open, yet richly resonant recording) is the orchestral equivalent of a Peter Hall staging - with a focus entirely on the... — BBC Music Magazine, May 2011, 3 out of 5 stars More…

For the first of four projected discs with BIS, Nézet-Séguin and his Rotterdam players have recorded Hector Berlioz’ masterpiece Symphonie fantastique, in a full-blooded and luxurious performance which at the same time respects the work’s classical proportions

The work is here followed by the ‘lyrical scene’ Cléopâtre (often referred to as La Mort de Cléopâtre), composed shortly before as Berlioz’ entry in the competition for the prestigious Prix de Rome.

Performing the part of Cleopatra is the electrifying soprano Anna Caterina Antonacci in one of her rare appearances on disc.

one hears that what Nézet-Séguin offers (aided by a superlatively airy, open, yet richly resonant recording) is the orchestral equivalent of a Peter Hall staging - with a focus entirely on the text itself, not its extra-musical 'narrative', and with no whipped-up histrionics, just apt tempos and pinpoint placing of each note and accent.

[an] expressive, operatic reading of the Fantastique...He's not afraid of violence, noise or audience-rousing codas - try the end of the first movement or the sweep of the ball...The fill-up is gorgeous enough to make purchase obligatory.

his Fantastique is wonderful...the best of it is almost mind-bending in its hallucinatory vividness – the last two movements have rarely sounded more weird – and the whole thing captures the sense of self-dramatising Romantic shamelessness that lurks behind it. Ultimately, then, a very fine performance.

This a strong, clean-cut performance of the Symphonie fantastique...blessed with lucid playing that mirrors the translucency of Berlioz’s scoring. Yannick Nézet-Séguin conducts with rhythmic punch and, in the Scène aux champs, has the measure of the rustic tranquillity...Antonacci sings with thrilling intensity.