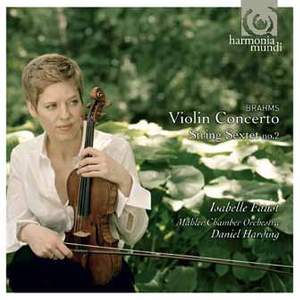 What makes Isabelle Faust's Violin Concerto special is that she both thinks and feels the music freshly...Equally valuable is the sense of interplay between Faust and the Mahler Chamber Orchestra... — BBC Music Magazine, May 2011, 5 out of 5 stars More…

The booklet of Isabelle Faust’s new recording includes an essay written by her regarding the performing editions used and the significance of the violinist Joseph Joachim in the string works of Johannes Brahms, as seen from a performer’s point of view. Since Brahms did not belong to a generation of composers who mastered several different instruments – as had Bach or Mozart – and composed from the perspective of a pianist, his exchange of ideas with Joachim, which in the case of the Violin Concerto lasted almost a year, was of decisive importance for the final form of the piece, one of the most difficult in the repertoire. Isabelle uses the rarely played cadenza by Ferruccio Busoni, which dates from 1913. Brahms got to know Busoni as a child prodigy and recommended the young pianist in a number of artistic circles: ‘What Schumann did for me, I will do for Busoni.’ The spirit of Joseph Joachim also hovers over the second work on this recording, for the composer regarded the violinist as his most important adviser in the realm of chamber music too. In the case of his Sextet, however, the most perceptible influence is that of the doomed love affair between the composer and the soprano Agathe von Siebold. That Brahms was unable to overcome their separation with a light heart is clear from the monument in sound to his lost romance in the lyrical second theme of the first movement. ‘A-GA- D/H-E’1 proclaims the sequence of notes making up the motif (bars 162 ff). Isabelle generously credits Christopher Hogwood, Robert Pascall, Stefan Weymar and Douglas Woodfull-Harris for their active support in all questions relating to the manuscript and the first edition of Op.36 and for generously making available a prepublication copy of the new Bärenreiter edition. Gramophone Magazine gave Isabelle Faust its Young Artist of the Year Award for her first recording of sonatas by Béla Bartók, in 1997 [now reissued on hm gold with volume 2].

The year 2010 marked a new stage in her recording career: Diapason voted her CD of Bach Partitas and Sonatas a Diapason d’Or of the Year, while her complete set of the Beethoven Sonatas with Alexander Melnikov, received the Gramophone Award for Best Chamber Recording. Composed of around 40 musicians from 20 different nations, and independent of external sponsorship, the Mahler Chamber Orchestra was founded in 1997 by the players themselves and Claudio Abbado. In 1998, at the age of 22, Daniel Harding became Principal Guest Conductor; in 2003 he was named Music Director and he has served as Principal Conductor since 2008, conducting around a quarter of the orchestra’s projects each season. He is also Music Director of the Swedish Radio Symphony Orchestra, Principal Guest Conductor of the LSO and Music Partner of the New Japan Philharmonic Orchestra.

“a poetic player with an irresistibly warm sound, a tightly controlled vibrato and an athletic technique." BBC Music Magazine

What makes Isabelle Faust's Violin Concerto special is that she both thinks and feels the music freshly...Equally valuable is the sense of interplay between Faust and the Mahler Chamber Orchestra .Strong personality though she is, she never treats the work as a star vehicle...the orchestra retains a presence, allowing the soloist to step centre stage but reacting discreetly to her thoughts.

Faust emphasises the sensitivity, the aching loneliness and doubt that lurks behind the music, and the best moments are the most unexpected...A refreshing take on repertoire that's often presented with more emphasis on macho punch. Top-notch, affectionate and imaginative playing from all concerned.

With a string section of just 32, the Mahler Chamber Orchestra achieve an unusual degree of clarity, with the important wind parts prominent. And Faust is often happy to allow soloists from the orchestra to take centre stage...the fiery parts of the concerto are particularly successful and the lyrical episodes very touching...this performance [of the Sextet] offers near-perfect balance and integration of sound

The relatively small band of the Gustav Mahler Chamber Orchestra supports [Faust] with an accompaniment of great textural clarity, yet this is in no way a small-scale performance. On the contraty, Faust is authoritative and passionate throughout, always alert to the rhapsodic aspects of this most innately classical of Romantic concertos...This is altogether an outstanding disc.

Her performance is wonderfully proportioned...never grandiose nor unnecessarily rhetorical, with the Mahler Chamber Orchestra supplying perfectly scaled support...those who prefer [their Brahms] expressively searching and introspective should love it, with the bonus of the delicate and deft account of the Sextet.

Backed by detailed research into the metronome markings used by Joseph Joachim, the Violin Concerto’s dedicatee, Faust and Harding have come up with an interpretation that is restrained, slimmed-down and light on its feet.

In the precise, exquisitely sensitive and understated vision of Isabelle Faust, it is one of the most beautiful and rapturous performances I have ever heard...Do not miss the gorgeous playing of the Mahler Chamber Orchestra with conductor Daniel Harding: the texture is like velvet.