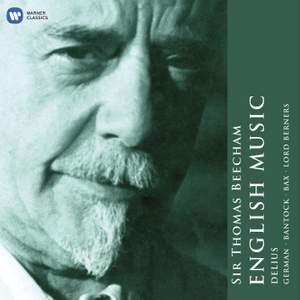 Beecham's English Collection is unmissable...[Song of the High Hills is] one of the first recordings made by Beecham's new postwar orchestra, and they already play as though they adore him — BBC Music Magazine, July 2011, 5 out of 5 stars More…

Delius: Over the hills and far away

I. Theme (with easy movement)

III. Variation 7 (Rather quicker but not hurried)

II. By the River (Andantino)

A song of the setting sun! (Quietly)

By the sad waters of separation (With quiet movement).

See how the trees and the osiers lithe (Freshly).

I was not sorrowful (Very quietly but not too slow)

They are not long, the weeping and the laughter (Quietly).

Delius: A Song of the High Hills

Delius: On the mountains

SCENE 1 - September. A piece of land on a hill

The dream of Sali and Vrenchen (Wedding Scene)

The Walk to the Paradise Garden

Till of a sudden -

Yes my brother I know -

Bantock: Fifine at the Fair - A Defence of Inconstancy

Dance of the Fairy Princess

There can be few, if any, musicians who have singlehandedly done so much in the establishment of resources for musical performance than Sir Thomas Beecham.

During WWI he conducted and supported financially both the Hallé and London Symphony Orchestras and the Royal Philharmonic Society. In 1915 he formed the Beecham Opera Company which trained many young British singers in this field. Eight years later this became the British National Opera Company and was absorbed into Covent Garden in 1932 when Beecham returned to be its Musical Director.

To quote David Cairns “We are nationally and individually a more musically aware people because of him and what he gave us”. A forceful statement, true, but whose life could ever challenge it?

Dissatisfied by conditions and practices, notably the supply of deputies for rehearsals, prevalent in British orchestras, he formed the London Philharmonic Orchestra that same year. Beecham was now able to be at the fulcrum of all developments in music in Britain. WWII put an end to this halcyon period. With Covent Garden shut he travelled, primarily in America, and did not return to Britain until 1944. The London Philharmonic had now become a self-governing body so Beecham, then aged 67, launched the Royal Philharmonic Orchestra. This was the orchestra with which he committed to disc so many classic recordings with which EMI Classics marks the 50th anniversary of his passing.

It is true that Beecham had particular favourites in composers – Haydn, Mozart, Schubert, Berlioz, Bizet and Puccini spring immediately to mind; also his love for Handel – even though his performances were always BIG-scale! He was an early champion of Richard Strauss and became a most effective exponent of Sibelius. His name will always be inextricably linked with that of Delius whose music Beecham seemed to know better even than the composer and it is appropriate that they are buried not far apart in the graveyard at St. Peter’s Parish Church, Limpsfield, Surrey.

He was knighted in 1916, the year he succeeded to his father’s baronetcy, and made a Companion of Honour in 1957.This affable, brilliant, usually charming, ever-communicative, quick-witted – even, at times, to the point of cruelty, dedicated conductor was also the most gifted executive musician England has ever produced.

He was fortunate that his grandfather, a chemist, had created the highly successful pharmaceutical manufacturing business which bore his name. His father, who had started in the company whilst still a teenager, was also fond of music so he was prepared to fund his son’s enthusiastic appetite to attend operas and concerts both here and abroad.

Born on 29th April 1879 in St. Helens, he attended public school at Rossall where his talent at the piano became a legend (the only boy ever to have been allowed a grand piano in his study!). From there he briefly attended Oxford (Wadham) but the composition classes, with Charles Wood in London and Moszkowski in Paris, were funded privately. As a conductor he was purely self-taught.

He formed an orchestra in his home town and deputised for Richter at a Hallé concert when his father was mayor. His career path was clear: he would use his financial resources to support the art which he enjoyed with the aim of bringing it to as many as possible.

At the age of 30 he launched the Beecham Symphony Orchestra, all young and carefully chosen. They would tour, play for opera and ballet and give concerts of adventurous music. London duly welcomed him for a season of intensive opera performances and over the next three years introduced many new ones to British audiences, including by Strauss, Delius and the Russians. He also brought Diaghilev’s Ballets Russes starring Nijinsky and Karsavina to the British stage.

Beecham's English Collection is unmissable...[Song of the High Hills is] one of the first recordings made by Beecham's new postwar orchestra, and they already play as though they adore him

The finesse of the detail, the fierce attack, individual flair, corporate precision, blazing warmth: the sum total is playing of tangible personality and, often, ineffable beauty...Beecham might even make you love Delius.