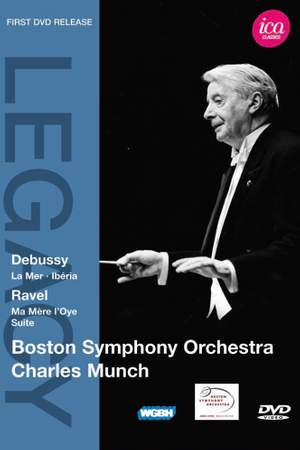 he conveys a natural, relaxed, humane demeanour that justifies the nature of his physical activity...he shows himself to be a musician with both considerable expressive range and a direct, unaffected... — BBC Music Magazine, July 2011, 4 out of 5 stars More…

Access to the publicly broadcast BSO concerts from this era has been extremely difficult even for researchers. This series of DVDs will make these performances available for the first time since they were broadcast. Munch launched the BSO into television in 1955.

He was an immensely popular conductor and well suited to being filmed.

This material represents some of the earliest televised concerts with the Boston Symphony and Charles Munch, and has been restored using the greatest care and state-of-the-art techniques. It is of exceptional musical interest and historical value.

Munch is best known for his performances of French music, Debussy and Ravel in particular, and introduced the United States to a great deal of French repertoire, which was the cornerstone of his tenure with the BSO. According to Richard Dyer, he conducted La Mer 80 times, and made five commercial recordings of the work.

All three works on this DVD were composed during Munch’s lifetime (Munch was 14 when La Mer was premiered and 21 for the premieres of Iberia and Mother Goose). An exciting, rhythmic conductor, he clearly enjoys his position on the podium, and was renowned for bringing something new and exciting to each performance as well as great spontaneity.

A number of the recordings he made with the BSO have sold steadily for more than 50 years and remain a permanent standard of reference.

he conveys a natural, relaxed, humane demeanour that justifies the nature of his physical activity...he shows himself to be a musician with both considerable expressive range and a direct, unaffected approach. Munch drives the orchestra hard in the ecstatic culmination of Debussy's La mer and in the finale of the Franck Symphony