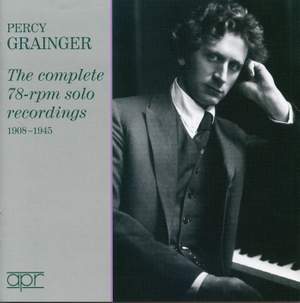 The maverick Australian's choice of recorded repertory is as idiosyncractic as expected, emphasising a small-ish number of individual works...His playing impresses all the more for never needing... — BBC Music Magazine More…

trad.: Turkey in the Straw (arr. D. Guion for piano)

Grainger: One More Day, My John

Molly on the Shore (Version for Piano) [1]

In a Nutshell: IV. The Gum-Suckers March

One More Day, My John

trad.: Sheep and Goat Walkin' to the Pasture (arr. D. Guion for piano)

Ramble on Love (After R. Strauss)

Molly on the Shore (version for piano)

Molly on the Shore (Version for Piano) [2]

Molly on the Shore (version for piano)

Molly on the Shore (Version for Piano) [3]

One More Day, My John

In the Bottoms: No. 1, Prelude. Night

This release is a tribute to the pianism of Percy Grainger who died 50 years ago in February 1961. Grainger was the most reluctant of virtuosos, always wishing that he he would be remembered primarily as a composer, yet his fame as an executant and the large number of recordings he made, attest to his greatness as a pianist.. Very few of Grainger’s recordings are currently available, and indeed many have never been transfered to CD before, so this set is a discographic landmark which finally reveals, in state-of-the-art transfers by Ward Marston, the true glory of Grainger the performer. His particular passions of Bach and Grieg are well represented (he become a close friend and favoured interpreter of the latter in that composer’s last years) but there are also ground-breaking performances of some of the great warhorses of the 19th century. In particular, Grainger’s recording of the Chopin B minor Sonata, the first ever of that work, has long been regarded as one of the classics of the Gramophone. Finally, there are 26 tracks of Grainger playing Grainger - surely these definitive performances alone attest to the timeless importance of this ouvre.

The maverick Australian's choice of recorded repertory is as idiosyncractic as expected, emphasising a small-ish number of individual works...His playing impresses all the more for never needing to rush - witness a scintillating rendition of Debussy's Toccata...They really *don't* make pianists like this now. Let's be thankful that, once upon a time, they sometimes did.

Ward Marston has provided quieter transfers of greater clarity and depth than previous releases of Grainger 78s...The booklet (John Bird) and annotation are up to APR's usual high standards.