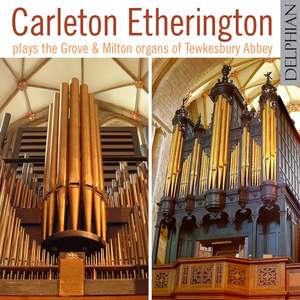 Few ecclesiastical buildings in the United Kingdom can boast possessing two pipe organs; of those that can, fewer still can rival the quality of the ‘Grove’ and ‘Milton’ organs in Tewkesbury’s magnificent Norman abbey. It must have been something of a coup for the organ builders Michell & Thynne to hear the legendary organist William Thomas Best proclaim their latest instrument (on show at the Liverpool Exhibition of 1886) to be “the finest organ of its kind that I have ever played upon”. Their ‘model organ’ was designed to be as flexible as possible within the confines of the smallest number of stops, and the result was an immediate success: its first appearance at the 1885 Inventions Exhibition in London caused something of a sensation amongst the organ cognoscenti. The blind organist Alfred Hollins, not long out of college, was one of a number of players who gave regular recitals on the instrument both at the London exhibition, and subsequently the following year in Liverpool.

Tewkesbury Abbey’s other organ known as the ‘Milton’ is a happy example of enlargement and rebuilding over the decades, resulting in its current incarnation as a flexible and thoroughly contemporary instrument capable of interpreting a wide spectrum of the repertoire This recording demonstrates the unique qualities of each instrument in a programme of concert organ works by some of the finest organists and composers of the past two centuries.