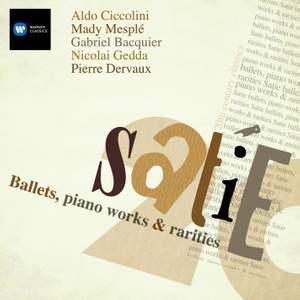 Erik Satie (1866-1924) was one of music's most unconventional characters. After two unsuccessful periods of study at the Paris Conservatoire he moved to Montmartre, earning a living as a composer and café pianist in an establishment that was frequented by the artistic community. He soon became friends with many of the literary and artistic names of the time, including Debussy and Ravel.

The first disc in this collection of Satie's works starts with what are his two most popular pieces, here in Debussy's 1897 arrangements for orchestra. There follows two of Satie's best-known ballet scores, Parade and Relâche and the disc ends with the lesser-known Mercure and Messe des pauvres, a curious piece for organ and choir.

The second disc is made up of a good selection of songs, including two versions of the quintessentially French song Je te veux, and ends with two short instrumental pieces.