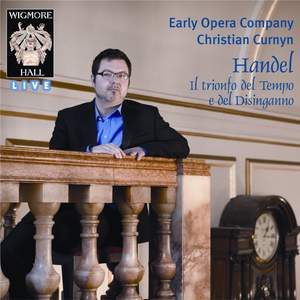 [Crowe is] breathtaking in pyrotechnic displays of virtuosity as she dismisses the threatening ravages of Time. She's ideally matched duetting with Anna Stephany as Piacere (Pleasure), and accompanied... — BBC Music Magazine, April 2011, More…

Director and harpsichordist Christian Curnyn was determined to recreate as faithful a sound as possible to what audiences at the time would have heard, not only instrumentally but notably in relation to tempi: “Everything in Handel comes back to the heartbeat rate, fifty per minute. Recently people have tended to go either very fast or make things very dragged out, but in my view that spoils it. Baroque music is all based on dance, which means a natural rhythm. Of course you should push the boundaries, but it should feel as though you’re pushing against a natural membrane. There’s an inner pulse in Handel which you can’t ignore.”

Christian Curnyn founded the Early Opera Company in 1994 since when they have performed in New York, at most of the major UK festivals and at the BBC Proms. Their many recordings appear on the Chandos label the latest of which, Handel’s Flavio, has just been issued.

[Crowe is] breathtaking in pyrotechnic displays of virtuosity as she dismisses the threatening ravages of Time. She's ideally matched duetting with Anna Stephany as Piacere (Pleasure), and accompanied by some of the best Baroque oboe-playing I've heard. Hilary Summers as Enlightenment is a remarkable contralto. An outstanding achievement.

throughout the concert the string-playing is immaculate...Anna Stephany reins her voice in with admirable discipline and there is a nice atmosphere of chamber music-making between her vocal lines and solos by organist Mark Williams...Crowe's animated coloratura is executed with precision and refinement, her embellishments strik[ing] the ideal balance between unpredictability and fitting the harmony naturally.

it is Crowe who takes the vocal laurels here and would be my main reason for recommending the set. Each of her arias is a highlight

Curnyn and his lithe ensemble make the most of the often sensual instrumental colouring.

Curnyn's choice of tempi and his measured use of embellishment allow Handel's glorious score to speak for itself...Lucy Crowe is in thrilling form as Beauty; Andrew Staples delights as Tempo; rich-toned Hilary Summers is authoritative as Disinganno and Anna Stephany, as Piacere, brings a special warmth to the signature aria "Lascia la spina".

The Independent on Sunday 6th February 2011