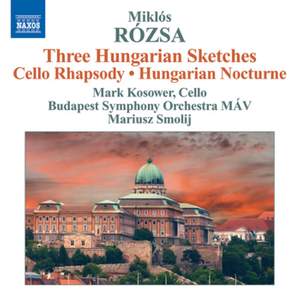 Rozsa: Overture to a Symphony Concert, Op. 26a (revised version)

Born in Hungary and trained in Leipzig, Miklós Rózsa moved to America in 1940, winning a name for himself as a master of the Hollywood epic. Along with his legacy of nearly one hundred film scores Miklós Rózsa’s concert music has held its place in the repertoire and this fourth Naxos album brings his heartfelt and impeccably crafted compositions to a new generation of listeners.

Mark Kosower’s Naxos album of Hungarian Music for Cello and Piano (8570570) was rated ‘audiophile quality’ by Strings magazine. Rózsa’s Violin Concerto and Sinfonia Concertante (8570350) were ‘recommended’ by Gramophone. His Music for Violin and Piano (8570190) was hailed as ‘impressive’ by Strings, while his Viola Concerto (8570925) was deemed ‘magnificent’ by Fanfare.