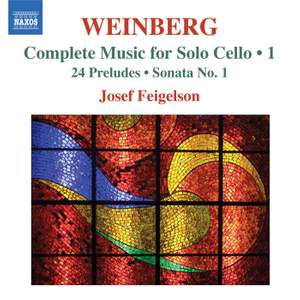 The importance of Mieczysław Weinberg’s 24 Preludes for solo cello, written for Rostropovich, lies beyond their superficial resemblance to Bach’s Well-tempered Clavier or the piano preludes of Chopin or Weinberg’s colleague Shostakovich. Instead, it resides in Weinberg’s remarkable ability to write for solo cello with almost limitless imagination, using myriad musical styles and varied techniques. These fascinating qualities are also to be found in his more expansively lyrical Sonata, a masterfully written outpouring of deep emotions. Latvian-born cellist Josef Feigelson has enjoyed a solo career spanning over three decades and champions neglected cello repertoire.

Recorded in June 1996 and originally issued on Olympia OCD594