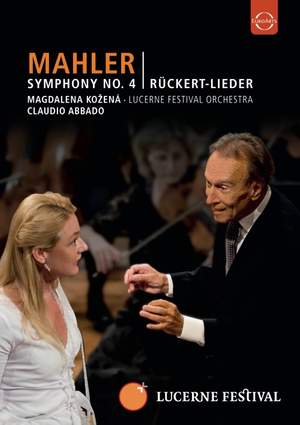 Recorded live at the Concert Hall of the Culture and Convention Centre Lucerne, 21/22 August 2010

there's no-one...who lifts the phrases so beguilingly (and without a baton) as does Abbado. You'll never see a first movement done with bigger smiles or more wide-eyed wonder, nor the poco adagio... — BBC Music Magazine, April 2011, 4 out of 5 stars More…

In Summer 2010 Claudio Abbado and his outstanding Lucerne Festival Orchestra performed another symphonic work by Gustav Mahler: the Symphony No. 4. Abbado combines the orchestral work (which features a solo soprano in the finale) with Mahler’s “Rückert-Lieder”. Soloist in both works is the Czech soprano Magdalena Kozena.

Magdalena Kožená does not only make the “heavenly joys” resound in the final movement of Mahler’s fourth symphony. Before that, she devotes herself to the seraphic beauty and intimate simplicity of Mahler’s Rückert Lieder.

Practically all the songs that Mahler composed prior to 1900 were based on texts from “Des Knaben Wunderhorn”, a collection of folk poems published by Clemens Brentano and Achim von Arnim. From then on, Mahler turned exclusively to a single poet - the Franconian orientalist and translator Friedrich Rückert. Mahler confessed that the poems moved him so deeply that he sometimes felt he had written them himself. In the transcendent final Lied, “Ich bin der Welt abhanden gekommen”, he also quoted a phrase from the Adagio of his 4th symphony. Asked what it meant, he said that it personified himself.

Claudio Abbado is undeniably a supreme Mahler conductor and his best selling recordings with the Lucerne Festival Orchestra – symphonies No. 2, 3, 5, 6 and 7 have already been released on EuroArts – have set new standards in interpretation of works by Gustav Mahler.

there's no-one...who lifts the phrases so beguilingly (and without a baton) as does Abbado. You'll never see a first movement done with bigger smiles or more wide-eyed wonder, nor the poco adagio heaven inflected as artistically as here from the master's goodlooking love-in orchestra, filmed with ingenuity as always by Michael Beyer's camera team.

There are innumerable incidental beauties from all sections: the woodwind nothing short of sublime, the brass tactfully reticent, the strings perhaps most remarkable of all with their radiant pianissimos...Kožená sings with consummate technical control and intellectual understanding...Here is profoundly affecting artistry which for once lives up to the hype.