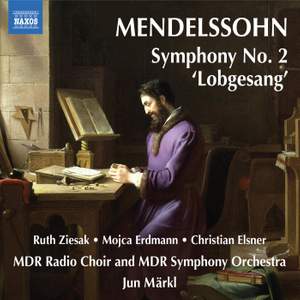 Märkl's version has many beauties, not least the duet before the final chorus which Ruth Ziesak and Christian Elsner sing with great tenderness...The chorus sing with gusto, and their final hymn... — BBC Music Magazine, February 2011, More…

Hot on the heels of October’s release of Elijah, comes a new recording of Mendelssohn’s opulent Symphony No. 2 ‘Lobgesang’. Principal Conductor and Artistic Director of the MDR Leipzig Radio Symphony, and Music Director of the Orchestre National de Lyon, Jun Märkl is one of the most notable conductors of his generation.

Mendelssohn’s immense Symphony No. 2 enjoyed great success following its 1840 première in Leipzig. Using texts from the Lutheran Bible, he created a stirring symphonic cantata in which the whole world unites in a triumphant song to the Heavenly Father. Jun Märkl, whose Naxos recordings have gained high praise, leads an outstanding line-up of artists in this thrilling performance.

Märkl's version has many beauties, not least the duet before the final chorus which Ruth Ziesak and Christian Elsner sing with great tenderness...The chorus sing with gusto, and their final hymn of praise is triumphant and exciting.

Märkl blows away any Victorian cobwebs with a reading that keeps Mendelssohn's precision scoring firmly on its toes...Those listeners who like their Mendelssohn fleet-footed and light as air should be well satisfied with Märkl's sparkling reading of this wonderful score.

[Märkl] shrewdly judges the balance between dignity and urgency, while the choral singing (with a notably incisive tenor line) is aptly full-blooded without compromising clarity in Mendelssohn's fugal textures...Ziesak and Mojca Erdmann combine attractively in the famous, and oft-maligned, duet "I waited for the Lord", which emerges with freshness and charm.

The secret...is not to let the inner tension sag...This Jun Märkl does admirably...The solo singing is outstanding...This is a splendid CD of an unfairly neglected and often misunderstood work, and at the attractive price it will be very hard to beat.

Strong performances from the MDR orchestra and chorus counter Wagner's jealous claim that this was merely a feeble imitation of Beethoven's Ninth.