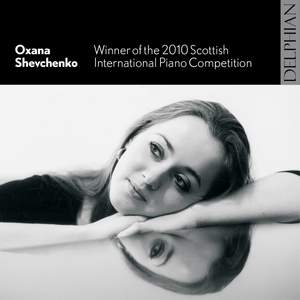 This is the most exciting debut disc to come my way for some time...It will only take the opening bars of "Alborada" to convince you what a fine Ravel player she is...while Thea Musgrave's specially... — Gramophone Magazine, April 2011 More…

Prelude No. 12 in G-Sharp Minor

On the nineteenth of September 2010, a rapt audience in Glasgow’s City Halls witnessed the extraordinary emergence of a young, 23-year-old pianist from Kazakhstan, who had already won the International Music Critic Prize at the 2009 Ferruccio Busoni International Piano Competition. Oxana Shevchenko revealed an extraordinary command of structure, rhythmic dynamism and sheer pianistic exuberance in her performance. She seized the moment with unbridled musical commitment and drive and carried away the first prize with unanimous approval from the distinguished international jury. She also returned home with £10,000, the Alexander Stone Memorial Trophy, the Frederic Lamond Gold Medal and a Bluthner grand piano, presented by Herr Bluthner himself, after performing Prokofiev’s Second Piano Concerto in the finals.

Just three days after her triumph in the concerto final, Shevchenko returned to the Royal Scottish Academy of Music and Drama, the setting of the first two rounds of the competition, to record a varied recital programme for Delphian as part of her first prize. Her chosen programme for the recording represents some of the highlights of her competition repertoire, and showcases the remarkable musical and pianistic qualities that she demonstrated during the competition.

“The results were announced following a tremendous, all-afternoon concert in which each pianist performed a concerto with the BBC SSO, playing in heroic form with conductor Martyn Brabbins… Shevchenko was next with Prokofiev’s Second Piano Concerto. She has been, frankly, gobsmacking since the start, and was absolutely consistent in her delivery of the Prokofiev: total power, complete clarity of articulation and a phenomenal level of musicianship that is already world class.” The Herald

This is the most exciting debut disc to come my way for some time...It will only take the opening bars of "Alborada" to convince you what a fine Ravel player she is...while Thea Musgrave's specially commissioned Snapshots is convincingly made a welcome addition to the repertoire...it is a rare gift to convey on disc also the sheer joy of performing as Miss Shevchenko does.