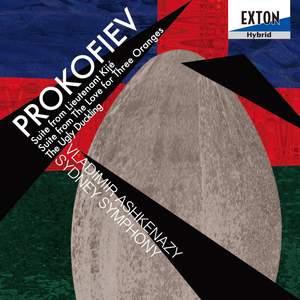 Prokofiev: Suites from Lieutenant Kijé, The Love for Three Oranges, The Ugly Duckling

Prokofiev: Suite from the Love for Three Oranges, Op .33bis

This 2-channel Hybrid SACD is a live recording from 2009 of part of a large ‘Composer Festival’ featuring the music of Sergei Prokofiev. The Sydney Symphony Orchestra and its chief conductor Vladimir Ashkenazy perform well-known suites of music from two of the composer’s works written for stage and screen, the film Lieutenant Kijé, and the opera The Love for Three Oranges along with his version of the fairlytale, The Ugly Duckling.

The Russian conductor Vladimir Ashkenazy is internationally renowned for his interpretation of the piano and orchestral music of the composers of his native country. Sadly, due to arthritis in his fingers he has been able to play the piano less and less in recent years, and during this period he has taken the opportunity to focus his attention on his role as a conductor. He became Principal Conductor and Artistic Advisor of the Sydney Symphony Orchestra at the time of these performances. Sergei Prokofiev composed the score for Lieutenant Kijé, in 1933 for the film of the same name, and compiled a suite of music from the soundtrack which became his opus 60. The “Love for Three Oranges” suite is taken from the opera that Prokofiev wrote in 1918. The story is based on a play by Gozzi that is written in the Commedia dell’Arte tradition.