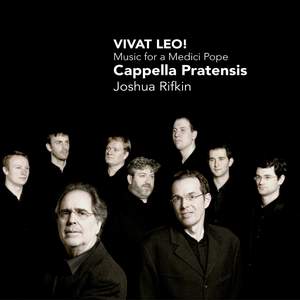 The internationally-acclaimed early music specialist and music director Joshua Rifkin leads the highly regarded choral group Cappella Pratensis, in a recording of music from the court of the Medici Pope Leo X. The disc is being made available as a Hybrid SACD.

Founded in 1987, the Dutch based vocal ensemble Cappella Pratensis champions the music of Josquin Desprez and the polyphonists of the 15th and 16th centuries. The group combines historically informed performance practice with inventive programmes and original interpretations based on scholarly research and artistic insight. As in Josquin’s time, the members of Cappella Pratensis perform from a central music stand, singing from the original mensural notation scored in a large choir book.

Joshua Rifkin’s work as conductor, pianist, and harpsichordist has spanned music from the fifteenth to the twentieth centuries. His recordings and concert performances with the Bach Ensemble, which he founded in 1978, set an internationally recognised mark for historically informed and musically vital interpretation of their namesake composer.

Music played a massive part during the time of the Medici pope Leo X, whose tenure covered the years between 1513 and 1521. Much of this has vanished, but a particularly vivid image of Leo’s musical world comes from the so-called Medici Codex, a collection of 53 motets possibly meant at first for Leo’s private use but ultimately presented to his nephew Lorenzo de’ Medici, Duke of Urbino.