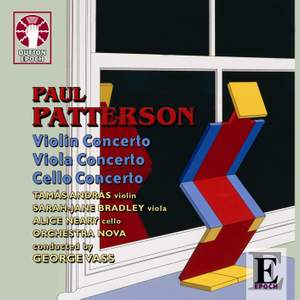 superb performances, vividly recorded...each of the soloists here is more than capable of sustaining magnetism...Sarah-Jane Bradley [is] outstanding throughout. — Gramophone Magazine, April 2011 More…

Composer Paul Patterson was present at the sessions for the recording of his three string concertos – one each for violin, viola and cello. With soloists Tamás András (violin), Sarah-Jane Bradley (viola) and Alice Neary (cello) sympathetically directed by George Vass, this is involving and approachable music of the new century, which will appeal to a wide audience.

superb performances, vividly recorded...each of the soloists here is more than capable of sustaining magnetism...Sarah-Jane Bradley [is] outstanding throughout.

a very fine disc of some very fine music...the Cello Concerto is perhaps the spontaneously deepest and most widely expressive of the three concertos...and the composer is served with an outstanding account of the solo part by Alice Neary. George Vass and his Orchestra Nova provide admirable partnership, as they do for the other soloists.