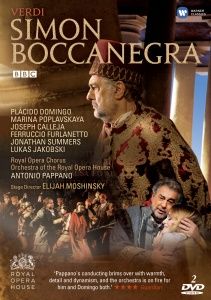 The result is far more than a vanity project...overall [Domingo] makes a remarkably moving and complex creation out of it...Summers is worn but malevolent in his sharply etched portrayal of the... — BBC Music Magazine, March 2011, 4 out of 5 stars More…

Plácido Domingo’s triumphant “return” to his baritone roots (his first debut with the Mexican National Opera, in 1959, was as a baritone), is captured in this stunning 2-DVD set of the Royal Opera House’s 2010 production of Verdi’s Simon Boccanegra. Domingo is joined by Marina Poplavskaya, Joseph Calleja, Ferruccio Furlanetto, Jonathan Summers and Lukas Jakobski in this Antonio Pappano conducted performance, directed by Elijah Moshinsky.

The Simon Boccanegra release features exclusive bonus material, including a “Back Stage with Plácido Domingo” featurette and an interview with director Moshinsky. There is an additional audio function which features introductions to each of the opera’s scenes (in English with subtitles).

Simon Boccanegra is Verdi’s magnificent telling of a humble 14th century Genoan who rises to become Doge of the great city. The plot centres on the political intrigues between Boccanegra (Domingo) and his adversary, the aristocratic Jacopo Fiesco and the discovery of his long-lost daughter, Amelia. This story – though replete with an inevitable tragic conclusion – is ultimately one of hope, as the two great men are able to rise above their power-driven animosities to ensure peace amongst their beloved Genoa’s warring factions and by placing familial and civic love ahead of their own individual desires.

Features exclusive bonuses: “Back Stage with Plácido Domingo” featurette, A video interview with director Elijah Moshinsky and audio introductions to each of the scenes (the DVD will include and option play with or without the introductions).

In a market full of Domingo birthday and anniversary reissue products, this 2-DVD release is a much anticipated new recording and performance.

The result is far more than a vanity project...overall [Domingo] makes a remarkably moving and complex creation out of it...Summers is worn but malevolent in his sharply etched portrayal of the venomous Paolo. But the vocal honours go to Joseph Calleja, possessor of one of the loveliest tenor voices around, whose singing as Gabriele Adorno is consistently imaginative and discriminating.

his command of [the title-role] is vocally authoritative and dramatically compelling...Pappano's silky and taut conducting is superb, and tenor Joseph Calleja has never sounded better as Adorno.

No vocal Tarnhelm has suddenly magicked a different-sounding timbre for this voice: here is, simply, Domingo singing - and evidently enjoying singing - a part that's lower down...the bigger difference between the voices [in the confrontations with Fiesco] permits a greater antagonism of the characters and clarity of text...What we might here cheekily call the supporting cast are strong

his musicianship, his intelligence and artistry, his commitment, the still-beauty of his voice and the utter lack of strain required for him to sing this role properly are well in evidence...[Calleja] has a true Italianate ring, it is easy at the top, he acts well and his phrasing is both musical and impassioned...Pappano undestands the dark tint of this opera and plays it for all it is worth

His fitness for the role is undeniable. That noble face, that charismatic presence and powerful body: how well they suit the Doge’s office...And camera close-ups reveal Domingo the consummate and generous actor...there’s plenty of heat in the gutsy orchestra and Antonio Pappano’s loving conducting. And above all else there’s Domingo: courageous, still eloquent, an artist in a million.