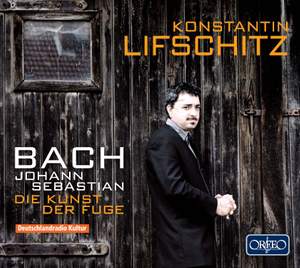 Lifschitz's dry-ish Bechstein clarifies the intricacies of Bach's counterpoint. He picks out fugal and imitative entries subtly but clearly, effectively analysing the contrapuntal miracles for... — BBC Music Magazine, January 2011, 5 out of 5 stars More…

Contrapunctus VI a 4 in Stylo Francese

Canon I, per Augmentationem in Contrario Motu

There has been much speculation about the Art of Fugue, Johann Sebastian’s unfinished work from his final decade. What would the ending of Fugue No. 19 have been? How would be the basic theme have been varied further, after all the multiplicity of variants that had gone before it? And what instrument(s) was it intended for? For one or more keyboard instruments, or even (since it is notated in score) a whole chamber music ensemble?

Konstantin Lifschitz made a stir with his world première recording of his own piano solo version of an even later ‘late’ work, the Musical Offering, but he suggests that the Art of Fugue is not “wholly a keyboard work (although it can be realised wonderfully on a keyboard). I myself can only perform it at a keyboard, and I can do it best on the piano”.

Today he is known across the world for his Bach interpretations, but by no means just for them. During his student days he played the fugues sporadically, either individually or in pairs. At that time, the Art of Fugue was rarely played complete in a single programme, let alone on the piano. Now a complete recording is finally available on CD. Lifschitz also performs the mirror fugues that until recently were regarded as unplayable by two hands: Bach had two players in mind. And thanks to the virtues of multi-track recording, he is also able to realise the four-part version of the three-part mirror fugue that Bach expressly intended for two players. The ‘Canon per Augmentationem in Contrariu Motu’ is also offered in an earlier version too. In accordance with the tradition begun by the work’s first publication, the recording closes with the chorale ‘Wenn wir in höchsten Nöten sein’, BWV 668a, which Bach’s closest family circle said he dictated in his final days. With such a work open to interpretation such as the Art of Fugue, there could ever be a single interpretation that would set the standard for all others, but this new cycle reserves Lifschitz a front-row seat.

"One of the challenges is to maintain the distinct identities of the independent lines that amalgamate to form Bach's enriched, hierarchical textures. Here, their separate and special status within a larger continuum was perfectly realised. Far from being apologetic about performing Bach on a Steinway grand, Lifschitz maximised the instrument's potential for colour and tonal variety, while never overloading the overall sound picture; everything remained clear, even with a strong focus on the leading line, which pealed out with a bell-like clarity." (The Guardian on a live performance in the Wigmore Hall, 2nd May 2011)

Lifschitz's dry-ish Bechstein clarifies the intricacies of Bach's counterpoint. He picks out fugal and imitative entries subtly but clearly, effectively analysing the contrapuntal miracles for the listener. But there's nothing inaptly pianistic about his playing, with minimal pedal, no octaves and narrow dynamic range...Lifschitz matches any of the current piano offerings.

his overall tempi occupy a moderate comfort zone: nothing too slow and nothing too fast, although the Canon at the Octave swings by at a bouyant clip...even Lifschitz's most liberal fluctuations of pulse never cause the music to drag...[he] remains consistent in his point of view, and repeated hearings reveal interesting details.

This is a very likeable interpretation because Lifschitz obviously respects the work but doesn't stand in awe of it. The performance emerges as very much his own, and Orfeo's recorded sound conveys his accomplished fingerwork clearly.