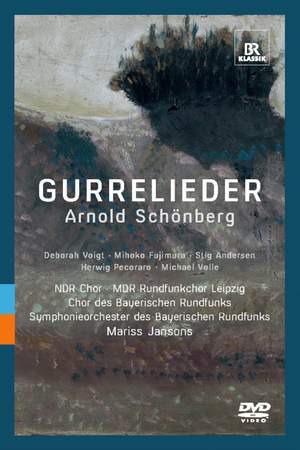 The core of this superbly well-balanced reading is as passionately dramatic an account of the 'Song of the Wood Dove' as you could hope to hear, with mezzo Mihoko Fujimura marvellously incisive... — Gramophone Magazine, July 2011 More…

Schönberg's mammoth opus concurrently proved his greatest public success – the Gurrelieder, premièred in 1913. No less than 150 orchestra musicians, five vocal soloists as well as three great German radio choruses populated the stage of the Munich Philharmonie in the Gasteig in October of 2009. The performance, marking the Symphonieorchester's 60th anniversary and led by Chief Conductor Mariss Jansons, was grandiose, the audience and press response – appropriately exuberant. To this day, the late romantic sound images, which seem not to fit in with the hackneyed cliché of twelve tone composer Schönberg (he first began concerning himself with this technique much later), directly stir every listener, and anyone who loves Strauss and Mahler should definitely not miss out on the Gurrelieder.

Documentation of a concert marking the 60th anniversary of the Symphonieorchester des Bayerischen Rundfunks.

Only available DVD of the Gurrelieder.

Including bonus material (introduction to the work, interviews).

Booklet: German, English including the libretto

The core of this superbly well-balanced reading is as passionately dramatic an account of the 'Song of the Wood Dove' as you could hope to hear, with mezzo Mihoko Fujimura marvellously incisive and engaging...Brian Large's cast experience with tele-filming concerts pays off in that viewers should never feel nudged into noticing things which might better pass them by. At the same time, we're given vivid evidence of the large forces involved