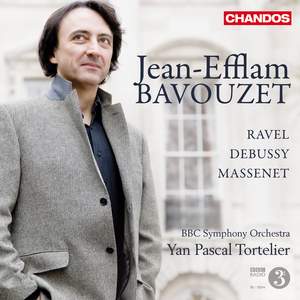 [Bavouzet] turns in a performance of the Fantaisie that illuminates this uneven yet magical work like no other. As to the Ravel concertos, I have no hesitation in saying these are the greatest... — Classic FM Magazine, January 2011, 5 out of 5 stars More…

Ravel: Concerto in D Major for the Left Hand, M. 82

The exclusive Chandos artist Jean-Efflam Bavouzet is a master of this repertoire. This is his second concerto recording for the label, after his survey of the complete piano concertos by Bartók (CHAN10610) which was released in September to high acclaim and voted ‘Orchestral Choice of the Month’ by the magazine BBC Music. Bavouzet’s complete recording of the piano music by Debussy also scooped awards from BBC Music and Gramophone, which wrote: ‘This could well be the finest and most challenging of all Debussy piano cycles.’ On this new release, Bavouzet is accompanied by the BBC Symphony Orchestra and Yan Pascal Tortelier, a conductor steeped in the French tradition and utterly at home in this repertoire. The result is a totally idiomatic performance of these French masterpieces for piano and orchestra.

Ravel’s light and brilliant Piano Concerto in G major is the intriguing result of a merging of classical models with the idioms and harmonies found in the popular jazz music of his day. At the time of composing this concerto, Ravel had just returned from his travels in the USA and the work is heavily influenced by the jazz music that he encountered there. However, in the second movement Mozart takes precedence, the piano’s theme closely modelled on the slow movement of his Clarinet Quintet; and Saint-Saëns’s sparkling semi-quavers fill the finale. The first performance of this work, given by Marguerite Long in Paris, was a great success, as was the European tour that followed. Another central piece is Ravel’s Piano Concerto for the Left Hand. The work was commissioned by Paul Wittgenstein, a concert pianist who had lost his right arm during the First World War. Although at first Wittgenstein did not take to its jazz-influenced rhythms and harmonies, he grew to like the piece. Speaking of the Concerto, Ravel said that he had been determined to make it sound ‘no thinner’ than one for both hands and noted that in the middle of the piece ‘innumerable rhythmic patterns are introduced which become increasingly compact’ and that ‘this pulsation increases in intensity and frequency’ before the various elements ‘contend with one another until they are brusquely interrupted by a brutal conclusion’.

Also featured on this disc is Debussy’s Fantaisie for Piano and Orchestra. Debussy was a highly self-critical composer and disowned or withdrew several of his early works; this piece was one of them. It was composed in 1889 – 90, and its premiere was scheduled, under Vincent d’Indy, almost as soon as the score was completed, but withdrawn by Debussy just as it was being put into rehearsal. The first performance did not take place until after Debussy’s death in 1918. Although the Fantaisie is the lone piano concerto by a composer regarded as one of the greatest among those who wrote for the piano, it remains one of Debussy's least frequently performed works even now. The work shows the influences of Fauré and Franck, and the piano does not figure as a solo instrument in the conventional concerto sense but rather as an equal partner with the orchestra, although the conventional three movements are still present.

Completing the disc in a unique manner are six pieces for solo piano by Massenet. Most famous for his operas and suites for orchestra, Massenet wrote a quantity of very charming piano pieces, of which Jean-Efflam Bavouzet has selected some of the best. The music is typical of its composer – highly tuneful, richly textured, and utterly compelling – and conjures an atmosphere which only a Frenchman could achieve.

[Bavouzet] turns in a performance of the Fantaisie that illuminates this uneven yet magical work like no other. As to the Ravel concertos, I have no hesitation in saying these are the greatest performances I have ever heard. The G major is a sharp as a razor, achingly lyrical when required and, above all, fun...The 'Left Hand', helped by Tortelier's incisive conducting is simply awe-inspiring.

Bavouzet’s G major concerto is the best since Michelangeli’s 50 years ago: it has style, verve, poetry and balance...they pull off a wonderfully propulsive Left Hand Concerto, full of pizzazz, spontaneity and arresting insights.

the interpretations catch the ear with their blend of subtle phrasing, polish and unanimous zest...A group of charming solo piano miniatures by Massenet complements and at times connects with the styles of Debussy and Ravel, and Bavouzet plays them beautifully.

Bavouzet's accounts of the two Ravel Piano Concertos are very special, quite wonderfully atmospheric, indeed magical; the delicacy and finesse of the pianism are dazzling...This is simply one of the finest records of French piano music in the catalogue.

As he did in his performance of the Concerto for the Left Hand at the Proms in the summer, Bavouzet undervalues its growling intensity...He's much more at home in the glitter of the G major concerto, with his elegant, delicately tinted playing and Tortelier's deft accompaniments

It is the particular mix that makes this disc so appealing...Albeit that the Fantaisie is an early work that Debussy himself seems to have shunned, this performance relishes its colour and élan.

The ebullient French pianist Bavouzet scales the heights in this splendid and generous CD with the BBC Symphony Orchestra...The G major bounces along, though, with reflective asides not forgotten. In the Concerto for Left Hand, Bavouzet winningly balances the grandiose and jazzy.