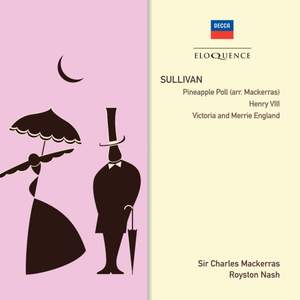 Sir Charles Mackerras’s irresistibly outrageous orchestrations contribute a great deal to the delight. … I, who had not heard these creative arrangements for many years, found that they came... — Gramophone Magazine More…

Sullivan, A: Victoria and Merrie England

Among the legion of Decca recordings boasting the company’s fabled ‘Decca Sound’, one that has been overlooked is the late Sir Charles Mackerras’s recording of his own arrangements of ‘moments’ from the G&S canon under the title Pineapple Poll. Like Gaîte Parisienne and Le Beau Danube it is a ‘jukebox’ ballet, built on cleverly assembled medleys, and it received its first performance in 1951. The remainder of this CD allows listeners the opportunity to hear examples of original music composed by Sullivan, without Gilbert. The incidental music from Henry VIII is one of the many examples of incidental music that Sullivan wrote for Shakespeare plays, while Victoria and Merrie England represents the last of his ballet scores.

Sir Charles Mackerras’s irresistibly outrageous orchestrations contribute a great deal to the delight. … I, who had not heard these creative arrangements for many years, found that they came up as fresh as the proverbial paint. Not only are the cheerful counterthemes much more complex than anything Sullivan ever imagined—notably some of those for the trombones—but the music is much more difficult to play, with the violins, I would think, taxed to the limit by some of the exuberant tempos; the Philharmonia Orchestra surmounts every problem.

its glowing ambience casts a pleasing bloom over the spirited and elegantly polished playing of the Philharmonia Orchestra. Mackerras conducts with great warmth