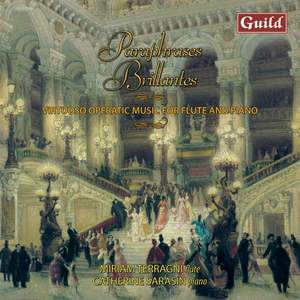 They play with complete rapport, considerable virtuosity where required, and are well balanced, so that the flute does not unrealistically overwhelm the piano. Miriam Terragni has a very beautiful... — MusicWeb International, 13th July 2010 More…

This outstanding new recording is certain to have a wide appeal to all lovers of the flute. In this carefully chosen programme, Miriam Terragni shows herself to be a complete virtuoso musician in playing a wide selection of music, mainly from the 19th-century, which has been chosen to represent a school of brilliant composer-instrumentalists who contributed much to the repertoire. Many of the pieces are based upon well-known operas of the day, notably by Verdi, and reveal an aspect of music-making of yesteryear which has too long been overlooked. She is wonderfully partnered by Catherine Sarasin and we are proud to present this CD which will certainly come to be recognised as one of the most important records of music for flute and piano to have been issued in many years.

They play with complete rapport, considerable virtuosity where required, and are well balanced, so that the flute does not unrealistically overwhelm the piano. Miriam Terragni has a very beautiful tone...with a surprisingly large range of dynamics and articulation. All in all both players do full justice the music and present it to its best advantage.