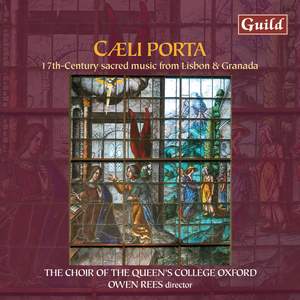 The Choir of the Queen’s College Oxford, Owen Rees

The Choir of the Queen’s College is an excellent mixed-voice choir where the women approximate the sound of English choir-boys. The balance and intonation are excellent, and Rees guides them... — American Record Guide, August 2009 More…

Portuguese music enjoyed its most spectacular flowering in the early seventeenth century. Many of the greatest composers were gathered in the capital Lisbon, and this was a period when many Portuguese musicians also made their careers in Spain, which was then linked to Portugal politically. This recording presents masterpieces of Portuguese polyphony from Lisbon and Granada brought to light by the choir’s director, Owen Rees. The Lisbon composers represented are Duarte Lobo (chapelmaster at the Cathedral), Pedro de Cristo (chapelmaster at the Monastery of São Vicente), and Manuel Rodrigues Coelho (organist at the Royal Chapel). Lobo’s beautiful and colourful four-voice Missa de beata Maria virgine is at the centre of the recording. We also give a picture of the rich variety of music adorning Vespers in Portugal at this time, including a thrilling two-choir setting of the psalm Dixit Dominus by Pedro de Cristo, Lobo’s dramatic two-choir treatment of the marian antiphon Alma redemptoris mater, and other psalms and canticles combining chant, polyphony, and organ music. The music of Manuel Leitão de Aviles – a Portuguese composer who directed the music at Granada’s royal chapel – remained in obscurity until brought to light by Owen Rees. Here we sing his works for Holy Week, including a fine set of Lamentations, and a celebratory motet for St Nicholas.

This is the fourth disc recorded for Guild by the Choir of the Queen’s College, Oxford, and forms a companion to Paradisi portas: Music from 17th-century Portugal, released in 2005. Owen Rees is at the forefront of research and performance of Iberian polyphony.

The Choir of the Queen’s College is an excellent mixed-voice choir where the women approximate the sound of English choir-boys. The balance and intonation are excellent, and Rees guides them with an appropriate gravity. Rees also offers excellent notes, and there are full texts and translations.

As a program, this disc offers a variety of textures and forms, and as an addition to a comprehensive Renaissance collection it enlarges the recorded repertoire.

Owen Rees continues his traversal of the riches of Iberian polyphony with a fine collection built on the idea of the `union of the crowns’ of Spain and Portugal...The inclusion, too, of organ music by Diego da Conceição and Manuel Rodrigues Coelho, splendidly performed by Charlotte Phillips, adds some welcome variety.

The full and informative notes by Owen Rees in the booklet of the new CD...would be more than enough to establish his scholarship...while the performances are more than sufficient to demonstrate his ability to present the wonderful polyphonic music of this period for a modern audience.