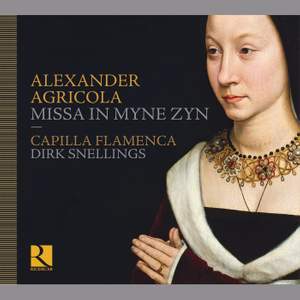 The Mass is enormous, even lacking a Kyrie, but the superb Capilla Flamenca, no strangers to this repertoire or to this composer, separate the sections with a series of motets and songs in exuberant,... — Gramophone Magazine, May 2011 More…

Alexander Ackermann, know as Agricola, was born in Ghent and was not only a contemporary of Josquin Desprez but also one of the most exciting composers of his period. Of the eight Masses by Agricola that have survived, the Missa in myne zyn is possibly the last, most demanding to perform and the most elaborate, making use of every possible technique, to include the thematic material of Agricola’s own 3-part song In myne zyn. The secular pieces recorded here lend themselves particularly well to the techniques of ornamentation and improvisation that the composer himself suggests.

The recording opens with a number of other settings of In myne Zyn, including Agricola’s three-voice setting on which he went on to base the Mass; and near the end is his short setting of a famous Marian antiphon, the Regina coeli, whose well known plainchant is heard in the top voice. The Mass itself is interspersed with shorter three-voice settings of other well-known tunes of the day by some of the most famous names of preceding generations: Comme femme desconfortée is by Binchois (d. 1460), D’ung aultre amer by Johannes Ockeghem, and Tout a par moy by the Englishman Walter Frye. These short settings, which may have been intended for instrumental performance, nicely illustrate Agricola’s habit of building free counterpoint on short, pithy motives that are passed from voice to voice, even on different parts of the beat.

Another piece is completely freely invented, with no borrowed material at all. This, again, is rather unusual, and so it’s perhaps not surprising that its title puns on a biblical quotation and the name of our composer: ‘My father is a farmer’ – Latin ‘Agricola’ for farmer. The Capilla Flamenca has long advocated the use of a group of soloists for the performance of polyphonic music; Agricola’s compositions suit the ensemble to perfection.

The Mass is enormous, even lacking a Kyrie, but the superb Capilla Flamenca, no strangers to this repertoire or to this composer, separate the sections with a series of motets and songs in exuberant, driven performances, employing violas da gamba.