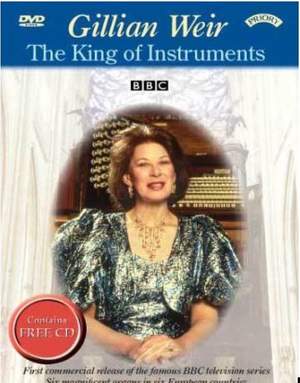 Gillian Weir: The King of Instruments

The series is filmed with imaginative camera angles that show off the beauty of the instruments and the buildings that house them. Indeed, it more than justifies Mozart's much-abused description... — BBC Music Magazine, January 2011, 4 out of 5 stars More…

This new DVD (with a free bonus CD containing specially recorded performances of some of the works) is a release by Priory of the BBC programmes that were recorded on six famous European Organs by Dame Gillian Weir in the late 1980s: [St Bavo, Haarlem; The Abbey Church, Ottobeuren; St Knud’s, Odense; Ulster Hall, Belfast; Hedvig Eleonora Kyrka, Stockholm; St Ouen, Rouen]. Running for over 150 minutes this unique visual collection of performances by one of the world’s most famous organists is not to be missed.

This DVD issue by Priory, the first since the original broadcast of the series, offers for many the first opportunity to hear the soundtrack in stereo. The programmes contain a glittering array of pictures and sound from these world famous organs: additionally, Dame Gillian talks about the pieces and the instruments. When first broadcast these programmes were watched by up to 2 million people.

The series is filmed with imaginative camera angles that show off the beauty of the instruments and the buildings that house them. Indeed, it more than justifies Mozart's much-abused description of the organ as 'the king of instruments', offering a firm reminder that Gillian Weir is the queen of organists.