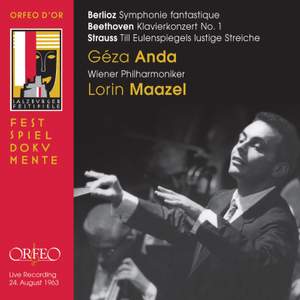 Less emotional in his choice of works, but more virtuosic and full of spirit was the young Lorin Maazel, who four years later jumped in to conduct the Vienna Philharmonic. Maazel proved his touch with the sentimental and grotesque contrasts of the High and Late Romantics by presenting an unusual programme that featured Berlioz and Strauss as its cornerstones. The Beethoven concerto formed a moment of repose in the centre of the programme, a work that Maazel, the orchestra and the soloist Géza Anda savoured in the loveliest spirit of unanimity. As an outstanding concert partner for the great orchestras and in his own solo recitals, Anda demonstrated a flexibility that was already a tradition in Salzburg, one founded anew by the instrumentalists of the early post-War years.