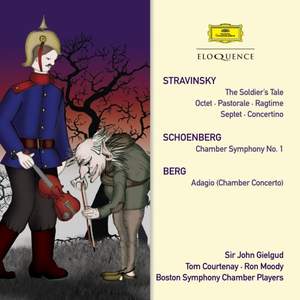 These Boston players give immaculately polished accounts of all five [chamber] works … The recording is excellent – clear without dryness, warm without over-resonance — Gramophone Magazine More…

Narrator: 'Phew, this isn't a bad sort of spot'

Music for Scene 1: Airs by a Stream

Narrator: 'Hurray, here we are! We're home at last!'

Narrator: 'The Devil was standing there'

Music for the end of Scene 2

Narrator: 'He took the book'

Music for the end of Scene 2: Airs by a Stream

Narrator: 'They have nothing - and yet they have it all'

Music for Scene 3: Airs by a Stream

Narrator: 'Now he comes to another land'

Narrator: 'They have the word for the band to play'

Narrator: 'I have everything, he thinks'

Triumphal March of the Devil

Stravinsky’s tongue-in-cheek morality masterpiece, The Soldier’s Tale, is one of his cleverest and most enduring works, here receiving its first outing on CD, following several requests. It boasts a stellar cast, not only of musicians, drawn from the Boston Symphony and soloists in their own right, but also of the narrators/actors – Sir John Gielgud, Tom Courtenay and Ron Moody, with English texts by Michael Flanders & Kitty Black.

The couplings include the BSCP’s complete LP of chamber music by Stravinsky (the Concertino and Septet being released on CD for the first time), and also works by Schoenberg and Berg, previously unissued internationally on CD.

These Boston players give immaculately polished accounts of all five [chamber] works … The recording is excellent – clear without dryness, warm without over-resonance

absolutely sparkling playing...The playing and recording are excellent throughout