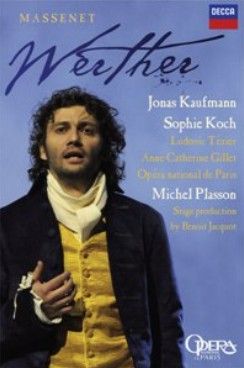 Soulful eyes, charismatic, a heartfelt voice: Kaufmann makes a perfect Werther, and Koch is a worthy partner in Benoit Jacques's staging. The only blot is the camera's visits backstage. — BBC Music Magazine, May 2014, 5 out of 5 stars More…

Hard on the heels of a triumphant Lohengrin, Decca follows up with an equally astonishing debut performance from Jonas Kaufmann: Goethe’s love-lorn hero Werther, in Massenet’s romantic opera. His premiere appearance in the role, in Paris in January 2010, took the French operatic world by storm, his performance being hailed by Le Monde: “Werther is portrayed by the tenor of the moment, the German Jonas Kaufmann. He brings to the part a sublime timbre (warm, at times “baritonal” and musky), exceptional musicality, a very wide palette of tonal shadings and immaculate diction. Add to that his histrionic gifts and matinée-idol appeal and you’ve got a cocktail of qualities that rarely all come together at the opera.”

He was supported by a superb French cast, including Sophie Koch as Charlotte and Ludovic Tézier as Albert, with the venerable Michel Plasson giving an expansive, lyrical interpretation from the pit. Film director Benoît Jacquot’s attractive, straight-forward production, first seen at the Royal Opera House in London, focuses successfully on the various personal dramas of the opera.

Filmed in high definition widescreen by Idéale Audience, this new Werther is Jonas Kaufmann’s third Decca DVD, and follows the extraordinary success of his Royal Opera Carmen and the recently-released Lohengrin from Munich.

Soulful eyes, charismatic, a heartfelt voice: Kaufmann makes a perfect Werther, and Koch is a worthy partner in Benoit Jacques's staging. The only blot is the camera's visits backstage.

Kaufmann's singing...is rich and often extremely beautiful...[Koch] is a touching and dignified Charlotte...the playing is thoughtful and intense, and every care is taken over detail.

[on DVD] it comes beautifully to life, with Sophie Koch’s Charlotte much more involving in close-up than she was at a distance and Jonas Kaufmann an absolute dream of a Werther. Their scorching Act 3 duet will simply blow your head off.