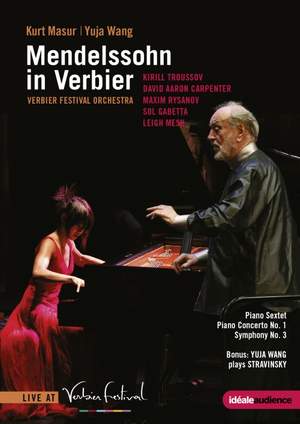 These magnificent interpretations of three Mendelssohn works – two orchestral and one chamber – are given by the phenomenally talented young Chinese pianist Yuja Wang and other young performers. Praised in BBC Music Magazine for her ‘keen intelligence’ and ‘staggering technique’, Yuja Wang has also been described by the San Francisco Chronicle as ‘the sort of musician whose combination of talents appears in the world only rarely’. The Verbier Festival Orchestra consists of musicians hand-picked from every part of the world. Here they are directed by the doyen of German Mendelssohn conductors, Kurt Masur.

The mixture here of seriousness, high spirits and virtuosity suits Mendelssohn well...Wang excels with her fingerwork, light pedaling and discreetly intelligent touches of rubato...No praise is too high for her bonus performance of the Three Movements from Petrushka...In the Scottish Symphony Kurt Masur exerts an easy, grandfatherly authority over his young orchestra