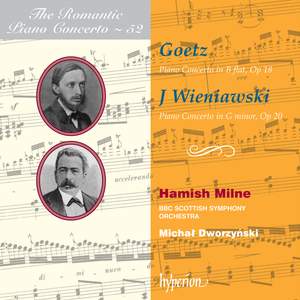 Hermann Goetz delivers generous helpings of melodic warmth with his virtuosic passages, whilst Josef Wieniawski is all about showcasing the birilliance of the pianist's technique...Hamish Milne's... — Classic FM Magazine, January 2011, 3 out of 5 stars More…

Hamish Milne makes a welcome return to the Romantic Piano Concerto series with two recherché delights from the nineteenth century.

Józef, ‘the other Wieniawski’ is the brother of the more famous violinist, Henryk. He studied at the Paris Conservatoire and had a wide-ranging and successful performing and composing career. His highly attractive Piano Concerto in G minor is in the mould of those by Chopin and Liszt, with the piano very much in the foreground. The Rondo finale demands a spectacular display of technique, living proof of Wieniawski’s own brand of virtuosity.

Goetz’s music, although full of melodic gift and mastery of form, was rarely performed after the end of his short life. His piano concerto proved to be the most successful of his orchestral works played during his lifetime, and was praised by the local press as ‘evidence of his outstanding talent, crafted, melodious, fiery and reflective, with a brilliant piano part. It is effective without playing to the gallery, often has quite new combinations of scoring in the orchestral accompaniment, and is, in the best sense of the word, modern’.

Hermann Goetz delivers generous helpings of melodic warmth with his virtuosic passages, whilst Josef Wieniawski is all about showcasing the birilliance of the pianist's technique...Hamish Milne's distinctive playing of great clarity and sensitivity invests both these concertos with a characteristic of their own.

There is, to be sure, plenty to keep the soloist busy [in the Goetz] but little that is flashy or meretricious, especially in Hamish Milne's hands...This is among the most rewarding concertos of Hyperion's entire series.