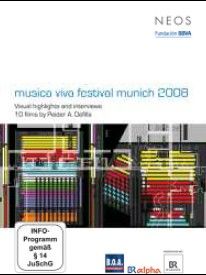 The ‘musica viva’ series was founded in 1945 by Karl Amadeus Hartmann and has become one of the most significant forums for contemporary music world-wide. In January and February 2008, a 3 week festival took place in Munich, the first time that such an event had been held in the series. This DVD includes10 films by Peider A. Defilla, covering the most important concerts of the festival.