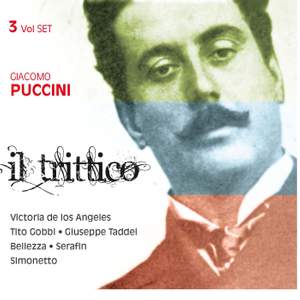 Resta vicino a me! (Michele, Giorgetta)

Puccini united three one-act operas into a single cycle in Il Trittico – although all three works differed in terms of style and design. The first part, Il Tabarro, a tragedy about love and jealousy, was set against the dismal background of boatmen and harbour workers, whose lives did not boast the carefree and merry charm of Bohème. The second work, Suor Angelica, was set in the seclusion of a convent. Angelica boasts an entirely female cast and the opera has a gentle, solemn mood. The third work is a legacy-hunter story from 1299, borrowed from Dante‘s thirtieth song from Inferno, the third part of the Divine Comedy. The three outstanding singers to be heard on this 1949 recording are Victoria de los Angeles, Tito Gobbi and Giuseppe Taddei.