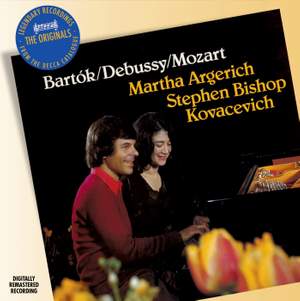 this performance of Bartok's Sonata for Two Pianos and Percussion remains peerless. The couplings are no less compelling. — BBC Music Magazine, April 2011, More…

Mozart: Andante and Variations in G for Piano Duet, K501

1. With Drums and Pipes

An addition the DECCA Originals range to mark the 70th birthday of Stephen Kovacevich [17 October].

Stephen Kovacevich's recordings of Bartók have long been regarded as reference recordings, and also included in this reissue are his acclaimed performances of the Sonatina and Out of Doors.

this performance of Bartok's Sonata for Two Pianos and Percussion remains peerless. The couplings are no less compelling.

Recorded in 1977, this strongly atmospheric and finely characterized performance of the Sonata for Two Pianos and Percussion still remains a top choice. This is most imaginative playing and the recording is exceptionally wide-ranging and truthful. It is difficult to imagine a more eloquent or better-recorded account of this powerful work. The rapport between the artists produces undoubted electricity