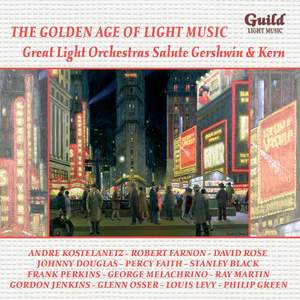 Kern: Look for the silver ining (From Sally), They didn't believe Me (From The Girl from Utah), Long ago and far away (From Cover Girl)

Kern: Why Was I Born? (from Sweet Adeline)

Gershwin: For you, for me, for evermore (From The Shocking Miss Pilgrim)

Kern: Who (From Sunny), I've told ev'ry little Star (From The Air)

Gershwin: Strike Up the Band

Kern: Long ago and far away (From Cover Girl)

Kern: Can I Forget You (from High Wide & Handsome)

The 20th Century was a time when popular songwriters were truly blessed by three wonderful inventions which transformed the way in which music became accessible to everyone, virtually on demand. The gramophone, radio and talking pictures created an almost insatiable appetite for words and music, which the entertainment moguls of the day did their best to satisfy. There must have been thousands of tunesmiths churning out melodies in the hope of attracting attention from a public always eager for more, but not all of them were gifted enough to be able to compose music that is still enjoyed many years after their lifetimes. Guild has previously saluted Richard Rodgers (GLCD5123) and Cole Porter (GLCD5127); now it is the turn of two more great songwriters George Gershwin and Jerome Kern. Gershwin's life was tragically cut short by illness - he died in 1937 at the age of only 38, but he achieved more during his short period of creative writing than most of his contemporaries. Kern also died relatively young - he was 60 when he passed away in 1945 - but both these talented men were supreme in the fields of theatre, film and popular music, as this collection vividly testifies.