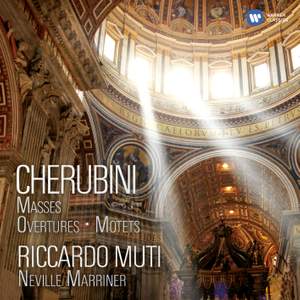 Muti delivers his characteristic energy to this music, recorded live in 2003; his performance are not always perfectly polished, but in thrust and concentration they are most compelling...Characterful... — Penguin Guide, 2011 edition More…

Excerpt,  Cherubini: Mass No.11 'For the Coronation of Charles X'

Excerpt,  Cherubini: Mass No.11 'For the Coronation of Charles X'

Luigi (Carlo Zanobi Salvadore Maria) Cherubini was born in Florence in September 1760. He received his first musical instruction at the age of six from his father, Bartolomeo, who was maestro al cembalo at the Teatro della Pergola. Three years later he was studying contrapuntal techniques with the Felici family, father Bartolomeo and son Alessandro. Following the elder Felici’s death in 1776 he took lessons from two other musicians in the city.

According to Cherubini’s catalogue of his works his first composition to be performed was a Mass and Credo in D minor in 1773. It was scored for four voices and orchestra and was directed by Bartolomeo Felici; it has since been lost as were three further masses dating from the three succeeding years. He had composed 36 works by 1778 including the cantata La pubblica felicità which was performed in honour of the Grand Duke Leopold of Tuscany (later Emperor Leopold II) in the Cathedral.

Leopold awarded Cherubini a grant to study with Sarti, a leading opera composer. Of the operas, indeed all of his works, which he wrote before 1784 are either lost entirely or partially thereby making assessment of his early career impossible.

An English patron resident in Florence encouraged Cherubini to go to London where he found favour with the music-loving Prince of Wales (later George IV), both operas written for London have been lost. In the summer holiday of 1785 he visited Paris where he met his compatriot, Viotti, who had established his career in the city. Cherubini was made most welcome and he decided to settle there and, apart from a trip to Turin to attend the premiere of Ifigenia in Aulide which the opera house had commissioned, he never visited Italy again.

Cherubini thus continued the development of French Opera which started with Lully and followed by Rameau and Gluck, and carried it forward for the likes of Boïeldieu, Auber, Meyerbeer, Halévy and Berlioz. Apart from Medée, a great part for Maria Callas amongst others, his operas are not performed these days and it is choral works – particularly the Masses and Requiems – which attract attention. Riccardo Muti has recorded seven of these works and clearly believes in their importance in the history of music. The collection is supplemented by 8 overtures conducted by Sir Neville Marriner, who also accompanies Barry Tuckwell in the Sonata No. 2 for Horn and Strings and Maria Callas sings Medea’s great aria from Act 1 in an Italian translation.

Muti delivers his characteristic energy to this music, recorded live in 2003; his performance are not always perfectly polished, but in thrust and concentration they are most compelling...Characterful soloists too [in the Masses], with the soprano Ruth Ziesak singing radiantly.