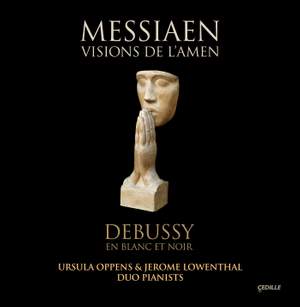 differences are delineated by exaggerating the spatial separation between the two pianos...Oppens and Lowenthal give a committed performance. At times they find a remarkable translucence, and... — BBC Music Magazine, December 2010, 3 out of 5 stars More…

This is an inspired pairing 20th-century French works for duo piano composed during the century’s greatest conflicts: Olivier Messiaen’s Visions de l’Amen (Visions of Amen) and Claude Debussy’s En blanc et noir (In Black and White). On other recordings, Visions de l’Amen typically appears alone or as part of an all-Messiaen program.

Messiaen’s Visions de l’Amen, from 1943, was composed in wartime Paris during the German occupation. With an orchestral range of colors and immense dynamic range, it’s a monumental set of seven mystical meditations, most beginning subtly and building to an exhilarating intensity.

Debussy’s En blanc et noir, from 1915, is the composer’s response to World War I. A landmark in the two-piano genre, the three-movement work is notoriously difficult to play.

Ursula Oppens is known for her enduring commitment to integrating new music into regular concert life. She has premiered works by Elliott Carter, Luciano Berio, György Ligeti, Witold Lutoslawski, and Charles Wuorinen, to name a few of the eminent modern composers she’s been associated with. She has performed with virtually all of the world’s major orchestras.

Jerome Lowenthal plays with a combination of youthful intensity and eloquence born of life experience. He studied in his native Philadelphia with Olga Samaroff-Stokowski, in New York with William Kapell and Edward Steuermann, and in Paris with Alfred Cortot, while traveling annually to Los Angeles for coachings with Artur Rubinstein. He has appeared as soloist with celebrated conductors of the present and past, and His chamber music collaborators include Itzhak Perlman and the Lark, Avalon, and Brentano quartets.

differences are delineated by exaggerating the spatial separation between the two pianos...Oppens and Lowenthal give a committed performance. At times they find a remarkable translucence, and there are some memorable hushed moments.