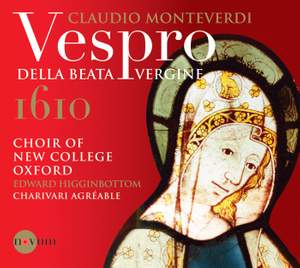 The tenor soloists, Nicholas Mulroy and Thomas Hobbs, are ravishing in 'Duo Seraphim'...The instrumentalists of Charivari Agréable are on fine form; they add wonderful shape to the phrases in... — BBC Music Magazine, December 2010, 4 out of 5 stars More…

400 years ago this September, Monteverdi’s great collection of church music, known as the 1610 Vespers, was published in Venice. To mark the anniversary, the award-winning Choir of New College Oxford, under its celebrated director Edward Higginbottom, releases its own version of this masterpiece. The performance bristles with the musical energy invariably associated with New College Choir, coloured by the very special sound of its trebles alongside outstanding tenor and bass voices. Apart from brilliant contributions from the tenors Nicholas Mulroy and Thomas Hobbs, all the solo material is taken by Choir members, emphasizing the nature of the music as a consort work. This approach to the score conforms to historical practice, retaining however a contemporary sense of drama and musical inflection. The Choir is joined by another award-winning group, the Oxford-based Charivari Agréable (director: Kah-Ming Ng). Their instrumental contribution, scrupulously following the directions given in the 1610 print, and coming to a climax in the Sonata sopra Sancta Maria and the Magnificat, brings the Vespers sequence to a brilliant conclusion. This New College version, with its unique treble voices, and faithful reading of Monteverdi’s performance instructions, is unlike any other: one to add to any library.

‘After 30 years as music director of New College Oxford, Edward Higginbottom has turned its choir into a national treasure: a choir as strong on intensity and commitment as crystal-clear of voice and vision.’ Anthony Holden (Observer May 2006)

The tenor soloists, Nicholas Mulroy and Thomas Hobbs, are ravishing in 'Duo Seraphim'...The instrumentalists of Charivari Agréable are on fine form; they add wonderful shape to the phrases in 'Esurientes', and combine thrillingly with the boys' voices in the 'Sonata sopra Sancta maria'

The sonority of the boys' voices can be quite glorious, nowhere more so than in the final pages of the extraordinary Magnificat...in a broader sense the performance is well paced and its spaciousness is ultimately thought-provoking. Singing and playing is uniformly good.

the benefits are apparent right from the off, as "Domine, ad adjuvandum" shines out with a sound that is bright, strongly focused and clear, but also bright and creamy and with a characterful boyish edge to the upper lines...this recording has boys singing all the soprano solos, and a confidently musical job they make of them too

There's a fine pair of tenor soloists in the motet Duo Seraphim, and the great Sonata Sopra Sancta Maria is thrillingly done.