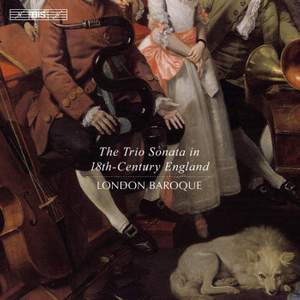 6th Earl of Kelly: Trio Sonata No. 6 in G major

On previous discs, London Baroque has charted the emergence of the trio sonata in France, England and Germany during the 17th century. Now returning to England, the ensemble has devised a programme consisting of works composed during the 18th century, and demonstrating the huge influence of Corelli, as well as tendencies – in the later works – towards the newer galant and pre-classical styles. London Baroque’s grand tour of Europe in the footsteps of the trio sonata has been warmly received by the reviewers. Their previous English sojourn was described in Strad Magazine as ‘carefully considered performances [which] radiate real empathy with the idiom’.

...voracious playing and demonstrative continuo from Charles Medlam and Steven Devine...Devine provides a fabulous harpsichord realisation in the Musette...London Baroque do sterling service to the leading native English composers of the era