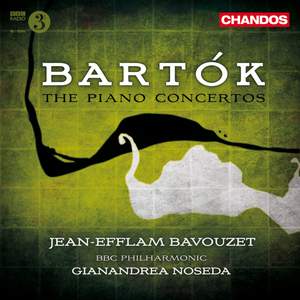 Bavouzet relishes the high-octane energy of the outer movements of the first two concertos but through his imaginatively varied use of colour manages to avoid the trap of making Bartók's percussive... — BBC Music Magazine, October 2010, 5 out of 5 stars More…

This is the first concerto recording by Jean-Efflam Bavouzet for Chandos. Following the tremendous success of his complete Debussy piano music edition (‘This could well be the finest and most challenging of all Debussy piano cycles’ – Bryce Morrison, Gramophone) – which scooped awards from both Gramophone and BBC Music – and the launch of his ambitious Haydn Piano Sonatas series, the pianist now turns his attention to some of the mightiest concertos of the twentieth century. The three Bartók Piano Concertos on a single CD represents superb value for money.

Bartók wrote his First Concerto, one of his most challenging works, in 1926. The percussive piano writing ads much bite to the textures. The first movement is striking in its rhythmic vigour and dramatic character. The central Andante is essentially a dialogue between the soloist and four percussion players and features much atmospheric ‘Night Music’. In the finale, following without a break, the brilliant motoric rhythms of the first movement return, as does the dramatic use of percussion in a thrilling mêlée of sound.

The Second Concerto was first performed in 1933. The music is more melodically appealing and in the first movement, which is notably contrapuntal, the strings are silent throughout. The hushed slow movement on strings is interrupted half way through by a brilliant and startling scherzo, with a striking sequence of tremolos and note-clusters, before the haunting quiet mood of the opening returns. The finale, again with brilliant use of percussion (as well as brass), ends the work in virtuoso fashion.

The Third Concerto was written at the end of the composer’s life, in 1945, and is much more restrained than the previous piano concertos. The work is lighter, airy, and almost neo-classical compared to much of his earlier music. Unlike much of Bartók’s output, the piece was not composed on commission, but was rather created as a surprise birthday gift for Bartók’s second wife, Ditta Pásztory, who was, like Bartók, a skilled concert pianist. The two lively outer movements, full of the composer’s distinctive rhythmic drive, are separated by a slow movement of great beauty and serenity, with, again, a striking, contrasting middle section. The final seventeen bars were orchestrated by the composer’s pupil, Tibor Serly, after the composer’s death, based on Bartók’s notes.

Bavouzet relishes the high-octane energy of the outer movements of the first two concertos but through his imaginatively varied use of colour manages to avoid the trap of making Bartók's percussive writing seem too relentless.

Bavouzet's own energy and lightness make the most of the jubilant, rhythmic writing.. It's a beautifully nuanced performance, brimming over with variety of touch and dynamic...The orchestra match him in their deft lightness, brightness and virtuosity.

If you're after a disc of Bartok's piano concertos that maximises on the music's drive, elegance and sparring potential, then you could hardly to better than his ear-catching new production...Bavouzet doesn't play down the music's earth-derived grandeur...or its drama.

Bavouzet's interpretations are masculine, intelligent and direct. In most of the nine movements, he opts for unusually brisk tempos, though quick as they are, the music never sounds rushed or precipitous. Clarity invariably prevails and Noseda and the orchestra are equal partners at every turn...the overall effect is viscerally exhilarating.

Both Bavouzet and the BBC Philharmonic with Gianandrea Noseda are outstanding in the First Concerto, capturing its epic scale and mixture of formality and barbarism...[These performances] generally have all the sweep, intensity and precision that these works demand.

In league with the finely honed BBC Philharmonic, these are performances vibrant in colour, vital in rhythm and detail and viscerally exciting in impact.

The Independent on Sunday 17th October 2010

From the paranoid wranglings of the First Concerto to the helter-skelter glamour of the Second and the burlesque of the Third, the playing is first rate. Pianist Jean-Efflam Bavouzet delivers coruscating cadenza and locates an almost Beethovenian limpidity for the Adagio Religioso.