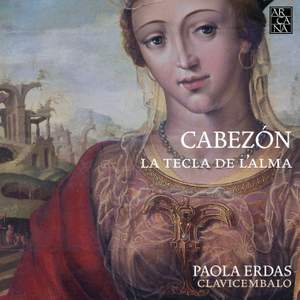 Cabezón: La Tecla de L’alma (The Keyboard of the Soul)

Erdas brings a deep understanding of and affinity for Cabezón's music to her performances, teasing out the inner logic of the tientos, and brilliantly illuminates his technical command of idiom... — Gramophone Magazine, Awards Issue 2010 More…

Cabezón, A: Ave maris stella I

Cabezón, A: Tiento I

On the occasion of the 500th anniversary of Antonio de Cabezón’s birth (3 May 1510), Paola Erdas releases this anthology of keyboard music by the greatest Spanish musician of the Golden Age. One of the most eminent Cabezón authorities, she is currently editing the critical edition of the Obras de Musica para Tecla Arpa y Vihuela (Ut Orpheus Edizioni, Bologna), the collection of Antonio’s works compiled by his son Hernando in 1578. Guest soprano Lia Serafini sings the tunes from which the composer drew his inspiration. Paola Erdas continues her collaboration with Arcana, following the success of her D’Anglebert disc, released in 2006 just before the late Michel Bernstein’s death.

Cabezón was a sensitive, refined man of genius, a perfect child of the world who experienced the splendours of the Spanish Empire, the colours of El Greco, the first picaresque comedies and Saint Teresa d’Avila’s mystical poems, made of flesh and blood. Born in Sardinia, Paola Erdas developed an early interest in the harpsichord. After obtaining her diploma in Venice, a grant allowed her to study for four years at the Mozarteum in Salzburg in Kenneth Gilbert’s class. During these years Paola’s love for the instrument and for musicological research increased, and she has developed a musical approach, in which the interest of research is never separated from lively and passionate performances.

Erdas brings a deep understanding of and affinity for Cabezón's music to her performances, teasing out the inner logic of the tientos, and brilliantly illuminates his technical command of idiom and style...Clearly a labour of love.