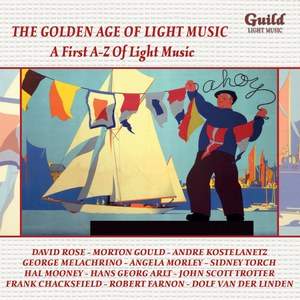 Duke, V: Ziegfeld Follies: What Is There To Say?

Brainin: It Wouldn't Be Love

Ewing, M: Moonlight on the Ganges

Burke, Joe: Tiptoe Through the Tulips

If anyone ever thought that the term ‘Light Music’ described a small corner of the music scene appealing only to minority interests, then maybe the wide variety of styles on offer in this collection will raise some serious doubts. No two people would probably ever agree on the exact boundaries of the genre, which is in itself an indication of how far it stretches across other musical styles. So within the 79 minutes of music on this CD you will find works originally created for light orchestras in the concert hall rubbing shoulders with popular melodies from other fields, given a fresh appeal in the hands of talented arrangers and conductors. When ‘A to Z’ was chosen as the idea behind this collection, there were initial doubts that suitable titles could be discovered for all the letters of the English alphabet. It was a close run thing (‘X’ was obviously going to be a problem!) but hopefully listeners will enjoy the result of our endeavours, starting with Alpine Pastures and ending with Zingara, meeting top conductors such as Sidney Torch, David Rose, Robert Farnon and George Melachrino along the way.