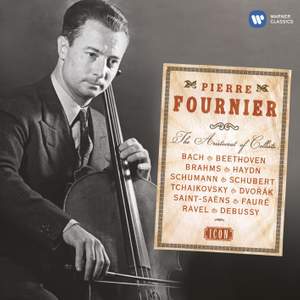 Pierre Fournier: The Aristocrat of Cellists

Tchaikovsky: 4 Variations on a Rococo Theme in A major, Op.33

Pierre Fournier was born in Paris on 24 June in 1906 the son of a French army general. He was known for his lyrical playing and his impeccable artistic sensitivity and this, during his lifetime, earned him the title 'the aristocrat of cellists'.

Fournier was first taught piano by his mother but at the age of nine he suffered a mild case of polio and lost some of the agility in his legs and feet. He was no longer able to master the use of the piano pedals and so turned to the cello.

At the age of 17 he graduated from the Conservatoire in Paris and was hailed as 'the cellist of the future', winning praise for his virtuosity and bowing technique. During the 1920s he played in the Krettly String Quartet and joined the Concerts Colonne Orchestra. His growing fame brought him into contact with all the great musicians of the time and he started recording with many of them.

Fournier's catalogue of EMI recordings is not extensive but, as illustrated by this 7-CD set, it covers a wide range of music from Bach to Poulenc, all recorded over a period of 34 years – from 1937 to 1971.

Fournier remained an active performer almost to the end of his life. One of his last concerts was in London when he was 78. He died in 1986.