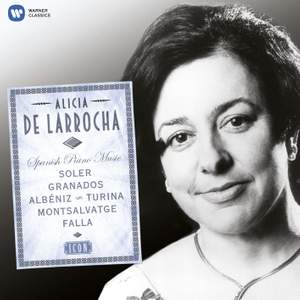 No. 4 Allegro humoristico - No. 5 Allegretto (elegante)

Alicia de Larrocha (1923–2009) was the leading Spanish pianist of her time, and widely considered the finest interpreter of two Spanish composers of the late 19th and early 20th century: Isaac Albéniz and Enrique Granados. She was also an outstanding exponent of mainstream repertoire by Bach, Mozart, Beethoven, Schumann and Rachmaninov.

This 8 CD set includes all the recordings of solo Spanish piano music she made for the Spanish company Hispavox in the 1950s and 60s, as well as a live recording of a concert with the Spanish soprano Victoria de los Angeles in 1971 and a concerto by Montsalvatge made in 1992.

The first CD opens with a group of Sonatas by the Spanish Baroque composer Antonio Soler, originally written for the harpsichord but performed here on the piano. These are followed by ‘Seis piezas sobre cantos populares españoles’ by Enrique Granados.

CD 6 includes a number of works by another major Spanish composer: Manuel de Falla, as well as more pieces by Granados and Albéniz.

CD 7 begins with pieces by Joaquín Turina, another composer of the early 20th century, and it concludes with ‘Concierto breve para piano y orquestra’ by Xavier Montsalvatge (1912–2002) in a recording made in Barcelona in 1992, the year of the Barcelona Olympic Games.

The final CD is an atmospheric live recording of a recital given in 1971 at Hunter College, New York, by the Spanish soprano Victoria de los Angeles to which Alicia de Larrocha makes an outstanding contribution as accompanist.