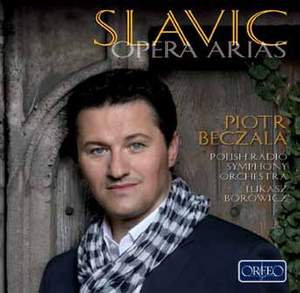 This Pole has an impressively solid technique, with a bright tone that moves easily between registers, encompassing an applause-guaranteeing high C at the end of Arensky's aria...No quibbles... — Gramophone Magazine, November 2010 More…

Piotr Beczała has enjoyed success at all the great opera houses of the world. He also excels in the Slavic repertoire, which may be less than familiar to the box office but worthy of recognition, especially with such a voice possessed by this Polish tenor. Notable successes have been Beczała’s sell-out performances as the Prince in Dvořák’s Rusalka at the Salzburg Festival and as Lenski in Tchaikovsky’s Eugene Onegin at the Met, Covent Garden and elsewhere. Beczała’s recital here includes highlights from the aforementioned works, but he also offers proof of the rich possibilities that this repertoire offers for a tenor to display both vocal grace and melancholy.

It was in Warsaw that many of the operas were premièred, such as The Haunted Manor, The Raftsman and Halka by Stanisław Moniuszko. He was one of the driving forces behind the patriotic opera aesthetic of the newly founded national states in 19th century Europe, an aesthetic not just restricted to Poland. These three operas offer intense scenes of reminiscence and contemplation for their tenor protagonists, and they are joined here by the later, almost verismo operas Janek and The Baltic legend. Prince Igor is more familiar in the west, so it is fitting that Beczała here reminds us once more of the qualities of Vladimir’s romance from it. The musical spectrum is completed by examples of exoticism and local colour with excerpts from Sadko (in two different orchestrations), May Night, Aleko and Arensky’s Raphael. This is a solo programme from one of the great tenors of our time, as varied as it is rich in discoveries.

This Pole has an impressively solid technique, with a bright tone that moves easily between registers, encompassing an applause-guaranteeing high C at the end of Arensky's aria...No quibbles with the orchestral playing, which is first-rate.

His bright lyric tenor has an inherent Slavonic plangency and he really sings off the words. He is also a thrilling technician (ringing high notes) and a musician to his core: the floated head-voiced climax to Levko’s aria from Rimsky-Korsakov’s May Night is golden-age singing.