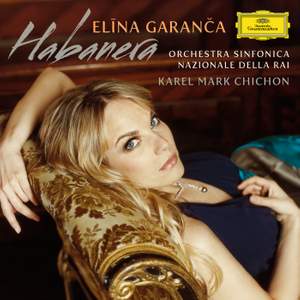 Garanča's is a medium-scale mezzo approach, elegant and devoid of ugly lurches into chest voice. — BBC Music Magazine, December 2010, 4 out of 5 stars More…

I Dreamt I Dwelt In Marble Halls

Elîna Garanča’s supple, seductive mezzo is aflame with the neon hues and rhythmic dash of Romany in excerpts from beguiling Gypsy roles in opera and operetta. Stand alone numbers add to the panache of Habanera.

Every generation has its “must see” Carmen. In 2010, the list of definitive gypsy seductresses – glittering with names like Baltsa, Bumbry, Calvé, Farrar, and Stevens – is enriched by the addition of Elīna Garanča.

After her triumphant success as Carmen in Riga, London, and Munich, Elīna Garanča, “the Carmen of our day” (News, Austria), has taken the NY Metropolitan Opera by storm in January 2010. This production was filmed live and the 2 DVD Set in 5.1 DTS surround sound will be released simultaneously.

Garanča's is a medium-scale mezzo approach, elegant and devoid of ugly lurches into chest voice.

Garanča gorgeous voice comes as a fantastic package: it caresses the ear with its velvety warmth, tingles the spine with its ringing bright overtones, and impresses the imagination with its well-supported evenness from top to bottom.

Garanča's voice has been described as "creamy", "silken" and "lustrous" (her chest register is superbly produced) but it also has a surprisingly rounded maturity. What sets her apart, however, is the unteachable ability to send shivers down the spine and make grown men salivate.

a brilliantly conceived album which shows off the agile and seductive voice of Garanča to the full...You can hear a lot of flamenco influence throughout this disc and the accompaniments vary between full orchestra, small ensemble and guitar.

Her voice impresses, though one notices that the sound has brightened of late, and that a newly found ease at the top has come...The shift allows her to interpolate a showy, but thrilling top B into Carmen's Seguidilla, and to tackle De España Vengo, the big soprano number from Luna's El Niño Judío, with abandoned ease.

Garanča may be Lithuanian but her mezzo-soprano has Mediterranean sensuality and warmth.