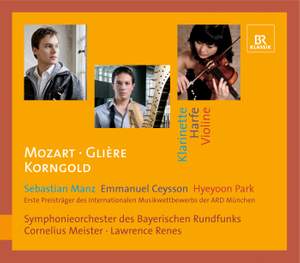 Time and again, the ARD International Music Competition in Munich has been the site of concert performances that make us forget that the name of this game is scoring points with a jury and keeping mistakes down to a minimum. All of a sudden the idea of a competition departs from our minds, and we concentrate our full attention on the concert event, suddenly opening up to the adventure, audacity, spontaneity and the perfect musical moments. Three such highlights with first prize winners are combined on this CD. Sebastian Manz, first prize winner in 2008 played Mozart's Clarinet Concerto as originally composed, on the basset horn, accompanied by the young shooting star on the conducting horizon, Cornelius Meister. French harpist Emmanuel Ceysson enchanted the audience with the iridescent wealth of colour in the rarely performed Harp Concerto by Reinhold Glière in September of 2009. And Hyeyoon Park, at 17 years of age the youngest finalist in the history of the Competition, revealed authentic prodigy qualities in a work overflowing with lush Hollywood charm, the Violin Concerto by Erich Wolfgang Korngold.

The exceptional talent at the 2009 Competition: at only 17 years of age, Hyeyoon Park made history at the Competition and thrilled the audience with Erich Wolfgang Korngold's Violin Concerto.