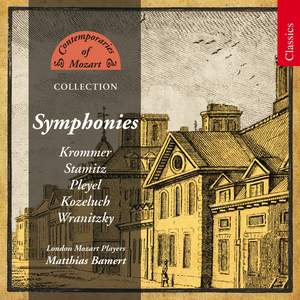 I. The Revolution. Andante maestoso

I. March of the Austrians and Prussians. Tempo di marcia

II. The Fate and the Death of Louis. Adagio affettuoso, con sordini

III. March of the Allies

III. The Tumult of a Battle. Allegro

IV. Rejoicing at the Achievement of Peace. Allegro vivace

Matthias Bamert’s ‘Contemporaries of Mozart’ project is one of Chandos’ longest-running and most successful series. The unquestionable genius of Mozart has tended to eclipse the accomplishments of many other composers who were writing at the same time as he. Many of these composers, successful in their day, suffered neglect in subsequent decades and in some cases were almost forgotten. Matthias Bamert’s series has shown just how rich this area of the repertoire is, and each of the CDs has received superb critical acclaim. This uniquely compiled box set comprises five of the most successful CDs in the series to date (many of the works are poorly represented in the catalogue, if at all) and provides an ideal introduction to the repertoire – at bargain price. Each CD offers a wealth of classically elegant melodies wrapped up in imaginative orchestration.